Fuel prices aren't cheap, are they?

Dropped $28 today on fuel for the marathon. Actually won't use them all, but isn't that kinda steep: eight GU Energy gels and three sport beans packs. 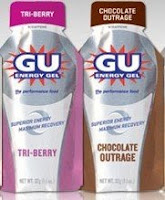 Decided a month ago that I'd go with GUs this marathon. I tried them on a lark and I immediately fell in love with them. Compared with Clif Shots and PowerBar gels, I find them less dense and easier to digest. They also, I've found, taste a little better, partly because you don't feel like you're choking on thick pudding. Believe me, choking down gels while running marathon pace is no fun at all.

In all, they're pretty similar to the other gels (see comparison data). I'll have to figure out the sodium intake, maybe i'll pack some Clif Shot Bloks. I plan to take one every 10K or so, plus one at the beginning, so that'll be about four i'll consume. Still thinking about bringing my fuel belt. We'll see.
Also, fingers crossed, weather's looking better -- high of 13C mainly sunny.
Posted by yumke at 8:41 PM

i bought all my gels too, you're right, not cheap, i ended up buying a box since I also had the $10 coupon since I registered through Running Room, so that helped a bit. Have fun this weekend, hope the weather holds up for us! :)

Gu are my favourite! It Boston I picked up a couple packs of these new "Gu Chompers" - Gu flavoured chews, similar to the Shot Bloks. Haven't tried them yet.

That forecast sounds a little better...

Gonna try the Clif shot Bloks again this marathon. Gels don't always go down easy for me so I'm hoping the Gus are more effective

I like this kind--in fact in Florida at Xmas I bought a chocolate mint type special seasonal flavour--a whole box--I hope they don't expire! Of late I haven't run far enough to be taking gels but the season is now starting.