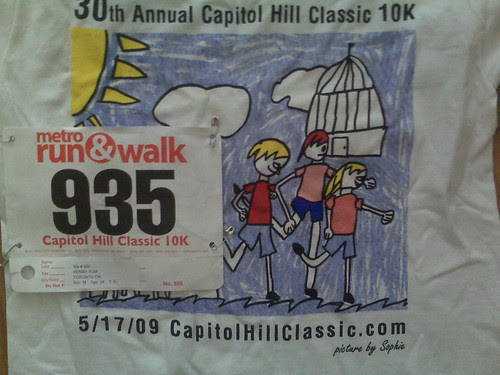 Second year I've done this race and I've yet to run it at true race pace. Last year, I ran the Capitol Hill Classic 10K two weeks after running the Flying Pig Marathon. This year, 7 days after Mississauga. Yeah, i'm still recovering but I love an excuse to line up.

This race reminds me of the Nightcrawler 5 miler I run back in Toronto, a smallish local race that draws out all comers. I love it. As far as 10Ks go, I'm still very encouraged with the 40:04 I clocked in two weeks ago so today would be the completion of 3 races in 3 weeks. So I seeded myself near the back in an effort to avoid going out too fast. Didn't hear the start and 1:13 later, we crossed the starting line.

So I realized that while it was a good idea to pace slower, I got a little frustrated by the slow pace, so like a few runners we started off to the side to make some time.
1K: 4:32
2K: 4:20

Missed the first water stop and we started to make the round of RFK stadium, which has a decline followed by an incline. Like last year, I started to maintain a faster pace and I made a few moves early on to make some space. By the 2 mile mark (3K in) we had an incline and I just started to up the pace for the next kilometre. Later on, we hit a water stop which I was happy to see and I took a cup -- I'm getting better and better at drinking while at full speed. While others slow down, I maintain speed and step it up to 4:30s. (An aside: It's hilarious that this was my marathon pace last summer, I've got some work to do before 4:30s feel easy again.) After the 5K mark, I saw that I was around 22:30 so I decided to pick it up for the final half.
3K: 4:18
4K: 4:34
5K: 4:33

We had quite a few corners and around the 6K mark, we saw the leaders coming in. The race marshals were having them turn into us so it was a little confusing. One runner complained about it and for a second I thought we were off pace, but then we hit the 4 mile mark and I saw my Garmin was dead on. We were then plunging into the big downhill (you can see the 4:11 and 4:06 Ks)
6K: 4:17
7K: 4:11
8K: 4:06

Through this period, I had passed quite a few runners but we were taking the hill. I focused on the runners on the other side taking the downhill and just imagined I was doing the same. Neat trick, it worked. I took it pretty strong, pacing off this guy who took off on us. Pretty good kilometre up the hill.
9K: 4:22

Which lead to the last kilometre and extra 200 metres the Garmin added on. When the course flattened I stepped it up, passing a few other runners. The last 300 metres, I poured it on and heard my name and country (Canada!) being mentioned.
10K: 4:09
Garmin excess: 39 seconds

Felt winded but still strong till the end. Even with my recovery phase, I know I could have run the first 5K a minute faster, maybe even more. But throughout the race, I kept on reminding myself that exactly a week ago, I was running a marathon. That kept me humble.

After the race, I walked down the big hill and was even more humbled by the last remaining runners running up the hill. Then I saw an old man limping down the hill, followed by a couple, trailed by a police car and ambulance. It's amazing seeing the determination, put my own running goals and aspirations in check.

Thanks for the great review! I missed the race this year, but am looking forward to doing it next year, even after hearing repeatedly that the hill on the course was a killer.

Great review! I ran it, too, and was completely humbled by that hill in the fifth mile.

I started out too fast but felt pretty good and knocked 8 minutes off my PR for a 52:14.

WOW you're fast! I'm so used to thinking in "miles" that it was really interesting to actually see it broken down by Kms. :)

Thanks for the tips on running hills!! I've been doing a lot of treadmill workouts because I get up too early to run outside (not so safe), which is my main issue. But, your tips help!

Definitely a respectable 10K. Congrats on completing your marathon sandwich. :)