An intentional step back

I made my decision last Monday, a day after running my first 20 miler in quite a few months. I wasn't getting enough sleep and running in the dark days already got to me a while ago. Time to slow it down for a bit.

I'm just not used to ramping things up in December and January, and I suspect that's got me a little out of synch. My legs felt tired and I never was able to get into a good pace. My shoes were flat and needed replacing, in fact, they are the same shoes in which I BQed in FOUR months ago. I have to stop holding on to shoes longer. My eating habits had a crappy month, not having enough time to cook all my meals, I have good days and bad nights. And it's not like I'm running 65 mile weeks to burn it all off.

I've written about the funk before and in previous years, I'd think there would be something wrong with me if I wasn't able to do every single scheduled run. One missed LT and I'd be questioning whether I would be ready for marathon fitness.

Know much better now, and that rest is just as important as getting the miles in. I went to DC for a long weekend and they had plopped winter on to the streets and trails. Great! So instead of doing long mileage, I kept in aerobic shape, doing about 4.5 miles a day around the Mall, running on snowy and icy trails. The Yak-Trax came in handy.

I have to remind myself that this is not going to be a fast Boston for me. I'll give the marathon its due respect but I don't think I'm going to set my sights at a PB -- making it this far in my running career lets me take this major marathon a little easier.

So the mileage last week was 20 on five runs. I feel much rested now, having caught up with sleep. Today, sporting my new Asics 1140s, I did a 4 mile run with a progressively faster splits, ending with a 7:09 last mile. Not super fast but a lot better than a I felt a week ago.

This week is supposed to be a step-back week. Tell you what, I'll take it.

(Thought the picture below of the bag that carried a jelly doughnut was hilarious..) 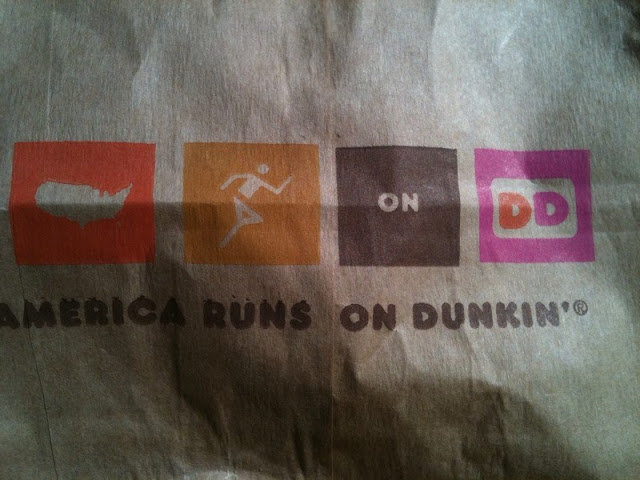 If you think that's funny, last year the Boston swag bag had a Dunkin Donuts 26.2 sticker. They take Dunkin Donuts very seriously in Boston - so perhaps there will be one in the bag this year. ;)

(As an aside, the fun think about Western NY is we're 50/50 split between Tim Horton's and Dunkin Donuts at this point. People from out of the area get confused.)

That is a classic! Donuts at the end of a long run are OK, although I STILL feel guilty.

You're doing the right thing. You have to think of your running not only as a season but as a lifetime activity, which means there will be times (including periods of months) where you step it down or just maintain. Nobody does a PB at Boston-having watched your struggle to get there, you want to enjoy every step of it and not be looking at your watch throughout!

I love the Dunkin Donuts 'slogan'. How appropriate...

It's a great thing that you know when you need a mental and/or physical break. Enjoy it and you'll come back refreshed!

Remember that Boston is a victory lap of sorts... you worked hard to get there so all you have to do now is enjoy it. You'll be trained enough to run a strong race and feel pretty good doing it - that's what matters!

angryrunner, that's funny, i look forward to getting a sticker :).

Mark and Marlene, i feel like a doughnut.. no literally,i feel bloated. That aside, i'm taking things easy, running fast when i feel like it.