The Toronto Marathons: Two seasons and a packed spring

So the two Toronto marathons will continue. City hall put out a release after the two sides made nice.

Goodlife is moving to "the spring" while Scotiabank Waterfront keeps its fall date.

It's kinda nice to see some positive vibes from the two race directors:

"We are delighted to have the support of the City of Toronto for our Signature Fall marathon in 2011 and look forward to continuing to build a world class marathon that showcases our great city to local, national and international runners,” said Alan Brookes, Race Director, Scotiabank Toronto Waterfront Marathon.

The more I think of it, we've just created a potential for a massive headache for our spring running calendar. Already, it's a packed schedule, and that's great because we get a relatively roomy two-month period where you can do racing in great coolish weather. That is, until now.

But think about this: There are two major Toronto-area races in the May period, a week apart, that could be very unhappy with the move. There is a major marathon in late May and there's the grand old lady of Canadian distance running in late March. The Toronto Marathon's going to have a lot to contend with.

One, funnily enough, is the 10K Sporting Life that's organized by the Waterfront Marathon group. It runs on the first week of May and yes, it's down Yonge Street. I just can't wait for the reaction when everyone realizes that both Toronto Goodlife and Sporting Life go down Yonge. I do not want to see the Toronto Marathon avoid the current first half of the race. It's a nice course. Sporting Life is Toronto's true big race -- one distance (10K) that attracts big crowds. What will happen in this case? Will the Toronto Marathon be run as a result in mid April (too cold?) or late May (too hot and competing against Ottawa Marathon).

The Mississauga Marathon runs a week after the Sporting Life. Mississuaga has been building a very big race weekend. I've run it and think it's a great spring course. Perfect timing for cool weather. I thought that it had a firm place in the spring racing calendar. In fact, I'm running it this year.

-Last week of March: Around the Bay 30K in Hamilton/Burlington
-First week of April: 5K/8K in High Park (no traffic issues there)

FIRST OPPORTUNITY FOR MARATHON: Three weeks of no major races but Boston is run in the third week of April.

-First week of May: Sporting Life, most popular single distance road race
-Second week of May: Mississauga Marathon, a growing and popular marathon with perfect weather
-Third week (or so) of May: Ottawa Marathon arguably the premier event since it hosts the national championships.

SECOND OPPORTUNITY FOR MARATHON: Last week of May or early June.

Lets not kid ourselves, this is a packed schedule and there are plenty of marquee races. Mid to late April may be doable but I don't see a hell of a lot of people training in January for both Mississauga and a new Toronto. Late May may be too late because of the weather.

So can a spring marathon actually hurt running in the area? Not really, but it could dilute the crowd.

Here's a visual representation of some of the races with the Toronto Marathon entering the scene: 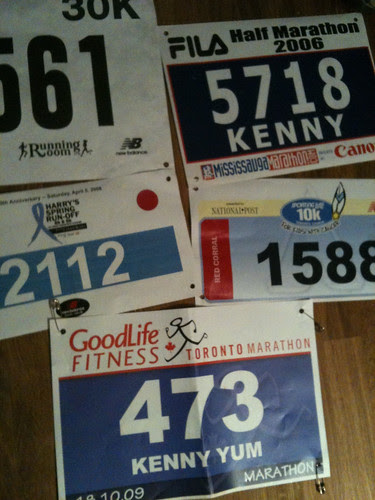 Fall: All of a sudden, we see that the race calendar after late Sept. shrinks. Like I wrote previously, I think the Fall marathon should be in October, possibly mid October to take advantage of the cooler weather. Also, pick a better route!
Posted by yumke at 7:43 PM

great post! i heard about the ruling today, but didnt get a chance to fully listen to it or read about it yet. thanx for the update.

ya i have no idea when they will put Toronto. i love the route that they have now. Running down Yonge street is fun and exciting.

i guess we will have to wait and see what they come up with.

and ill be at Mississauga as well. I am doing the 5k on the saturday and then the Half Marathon Walk on sunday!
see u there!

I wonder how this will affect Ottawa's race weekend. Lots of Toronto folks come down to run in Ottawa in late May.

I hadn't thought of Sporting Life-good catch and it also is Canada Running Series! There is no way that Yonge Street will be closed for two Sundays so close together.

Aneta, the mississauga races are fun, i really like the full and half routes.

EndorphinBuzz, yeah, I think Ottawa is a true destination marathon. I don't think it'll take a major hit.. I really want to do it one day. Something about being in the nation's capital on Vic day weekend. On my must-do list

Mark, how's this. Run the Sporting Life and Toronto on the same day.. that would be hilarious.

Great post! This will be an interesting one to follow. The Toronto is a staple on my schedule and I am glad it will continue. But it's absence in the fall opens up the opportunity to try out some of the other local races, Hamilton, PEC or Niagara.

interesting about the May race. I wonder if they'll think about moving scotiabank to a few weeks later.

I thought of that-they could stagger the start times-but CRS wouldn't like that because they'd lone many to GL...I honestly don't think this has occured to anyone yet--those who were pissed with two events three weeks apart will be equally (or perhaps more) missed with Yonge Street affected twice in the same period of time!

While I'm relieved the Goodlife Marathon will stick around, May is NOT good news. The original article I read indicated "early May" but I don't see how that is even possible with Sporting Life and Mississauga falling on the first two weekends.

I really don't see the logic of moving to May when the original issue was two major races shutting down the streets of Toronto 3 weeks apart. Like you pointed out, the conflict with SL10K will post the same issue!

Will be interesting to see how it plays out...

I am slo disapponted by the lack of October races. Once thing I know for sure, I will be running Goodlife this fall!