A lot us are fixated on sport these days, watching our winter athletes compete in the Olympics. I chatted away with my friend Lee after we met up to do about 12K last night after work. As we ran through our first few kilometres, we chatted about the speed skater Clara Hughes and how her mind boggling 5K skating time would earn her a speeding ticket.

Talk of Olympics quickly turned into comparing notes on our own winter training, then turned into the inevitable: the 'Olympics' of the running world, Boston. In April, I will run my first Boston and I told him that the victory was getting there. I'm going to enjoy the experience.

He kept on saying that he didn't want to spoil it by telling me everything, but I can already see it now. Arriving in Boston, seeing other marathoners, walking into the expo, lining up for the school bus ride to Hopkinton, lining up in the athlete's village. Just my talk of that, Lee said, sent shivers down his spine.

Excellence. I think we strive for it in our running lives. There is a point to our hard training. Boston celebrates excellence, but it also celebrates running. I don't run every day necessarily to find excellence, although my training program pushes me out the door for fear that if I don't follow it, I won't put in into the bank that i'll empty out on race day. I run to get rid of stress. I run to get some alone time away from my Blackberry. I run to feel pain and to feel what a human body is capable of if you tend to it. I run to earn my stripes as a runner. It's what we do.

On our run, we passed other runners and traded hellos. Enough of us were out there, even on a night when the rest of the country was settling to watch a hockey game.

Today, the weather turned into winter. Cold. Windy. Snowy. I traded messages with Lee and we both complained about the weather. Last thing I wanted to do tonight was to face the weather, but I forced myself out. It was tough at first, but running in snow covered trails was liberating. And wouldn't you know, 8 miles in, who did I see but Lee, hammering in another tempo run. Twelve miles later, I had logged in the run. Felt good. Another memorable run in the books. Fifty three days till Boston. 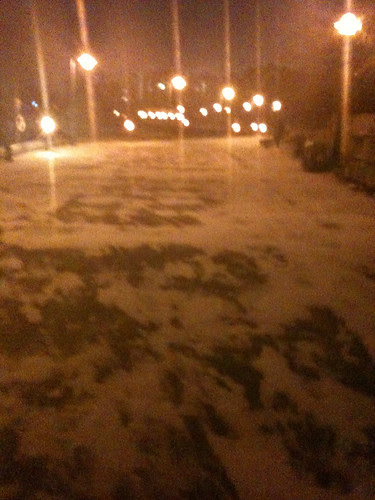 I got shivers down my spine myself reading that paragraph. Hopefully one day I can experience it too.