Running apps and my podcast appearance

My buddy Zoran, who I worked with at a previous job, has a podcast he started up last year called Runcast. Zoran's a fellow distance runner and we've spent more than a few hours talking shop (running) in the past few years. I'm looking forward to running Boston with him in April (he qualified in Mississauga last year on his first attempt) and he has also qualified for NYC Marathon.

I was checking out some running apps on the iPhone and Zoran asked me to review them for him for his show. You can find it here or get it on iTunes.

I looked at both Runkeeper and iMapMyRun.

Runkeeper: I didn`t end up buying the pro version (mostly because since I dished out $5 for iMapMyRun and didn`t want to spend $10 on the other)  but I did like the free version. As you can see from the screenshot below, it has a pretty cool interface and nicely shows your splits, a feature I didn`t see on iMapMyRun. Both apps allow you to use your iPod while you`re running, both allow you to take geolocated pictures while you are running. I didn`t think that a slightly better interface really made it necessary to dish out twice the amount of cash. 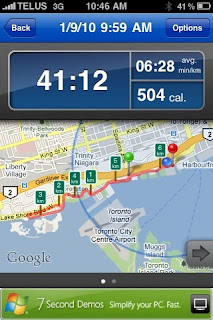 iMapMyRun: I ended up buying the pro version for $5 and thought it is a pretty cool tool. You really can`t argue that mapping photos to your run is a neat thing you can do. I may do this while running Boston (although I think I probably would run out of battery power over the course of a marathon). Pretty much the same tools, but a few social media options like tweeting out your run or updating your Facebook status updates. 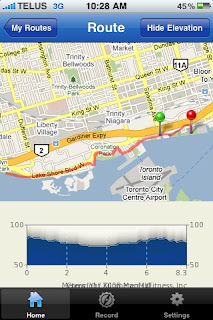 All in all, as I was telling Zoran, the apps are as accurate as the good old Garmins, and if you have an iPhone it`s an easy (and free even) addition to your running. Garmins in the end are the superior tool for display (ie, looking down at your wrist) while giving you so many rich data points that you can track.

I could write more, but hey, listen to Runcast.
Posted by yumke at 9:17 PM

So, are these apps actual GPS tools? I don't have an iPhone, but they sound pretty neat.

I can't wait for your live blogging during Boston.

Yep, they take advantage of an iPhone`s built in GPS.. they are prettycool