Flew into DC this morning with barely 5 hours sleep, but the weather is unbelievable, a few days before spring. It's a high of 23C so I figured that since R. is off, I'd tackle my long run today.

Today was one of those long runs that you knew you wanted to hurt. Even within a kilometre, I was pushing faster than 'long slow distance'.

Sometimes, you just don't listen to the body, you force it to wake up, to work a little harder, to remember what distance running feels like when you push yourself.

I did a whole bunch of out-and-backs along DC's running paths: To the zoo and back, on the towpath for a few miles, then out to Hains Point. Wish I could download the map, but it's a scenic, mostly flat route that lets your run pretty much uninterrupted for miles on end.

It was hot. I had two fuel belt bottles that I had filled up with Gatorade, then retopped at a water fountain. All the fuel I had was that, along with one gel that I took after 13 miles.

So the last 7 miles were a wee bit challenging, but I pushed it, finishing the run steps away from R's apartment (how do I measure my runs so well, I wonder -- 20 miles of running only to end up a block away from where you started).

Now the eye-popping part. I averaged just over 5 minute kilometres. Wow, that was unintended, but I'll take it. Didn't expect to do near pace work.

Exhausted and famished, I stumbled into a Subway for lunch, and an office worker asked me how long I did. I told him and he told me his wife just did 20 today too. We talked about her doing Boston, me doing Boston and it was a little funny having running talk while I was ordering as many toppings on my footlong tuna sub.

Doesn't matter, you can pretty much eat whatever you want after burning 2300 calories. 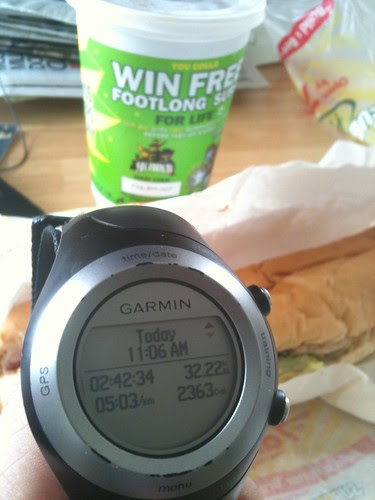 Agreed on eating (pretty much) whatever you want after a long run. And there are far less healthy choices out there than Subway. WTG on the speedy run!

It's too nice to be inside working today! :(

Enjoy the weekedn in DC!

Good job! Must be a bit of a challenge getting used to running in the heat after the conditions you have been used to in Toronto.

Good work, I'd kill for a 20+ degree day right about now!