I woke up at 5 a.m. to have my breakfast, and was dismayed to see the snow that had fallen. Checked the forecast, ate breakfast, and tried not to think about it before going back to bed.

Yep, two hours later the snow had not gone away. Damn. I had planned to do extra mileage today by running down to the race site from R.'s parents' place, a mere three miles away, but I was in no mood for that after ducking outside to do 200 metres. My pace didn't look good in the snow.

Luckily, R's dad drove me to the start, and I was shocked by the bad roads. There was a lot of slush and ice. I walked the course, saw the first turn was basically a pile of slush and got ready.

One of the great thing about races is I get to see some of my blogosphere/tweeps out there. I bumped into at least four, and two of them started with my pace group.

I wasn't sure if we would be running in snow and I knew how hard it would be to keep up the pace if it was crap, so I added this disclaimer to my pace sign. It drew a few laughs at the start and on the course. 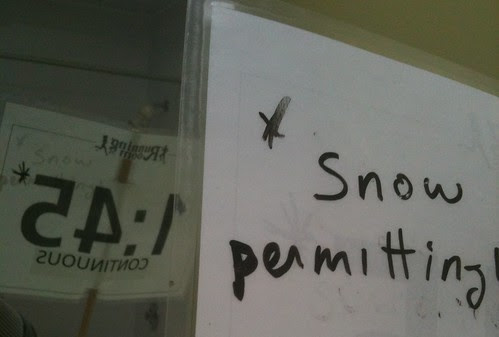 The start was a little bit of a mess. I was running with Marlene and we were dodging crowds, veering in and out of traffic and generally trying not to start off too so. The first corner by now was a puddle. We ran out west, then south on a mini out and back, and the runners were basically trying to run on those ruts that cars leave when they drive through snow. Because we were trying to gain ground and veer around slower runners, my feet were quickly soaked.

But by two kilometres, a second fast one made up for a slightly slower first, and we were on track. I have a lot of interesting memories of the first bit.

-having to leap over a pylon that came out of nowhere (okay, it was in front of me, but a runner veered away at the last second).
-continually have to shout out 'pace group coming through' to try to buy us some room. Yes, I was a swaying maniac for the first bit
-not one of the water stations seemed to be working well. At one, there was barely enough water in my cup. At another, the volunteer (love them) was holding the cup on the palms of her hands. Two cups knocked off.

I was pretty pleased with the pace. The ground was messy but we were still making time. It actually wasn't that bad and plenty of faster runners weren't having that much trouble ahead. Marlene had left around this time and I was aware of runners behind me, but this wasn't really a chatty group. I don't blame them, neither was I.

Pretty freaking good splits huh? I'm pretty proud of that. I was within 5 seconds of the target pace. I announced when we hit 10.6 kilometres that were were half way, and by then, the weather was pretty good, some wind, clearer (relatively) roads and we had a good pace.

We did a turnaround here, and I became a little more chatty, updating the group behind me on what our pace was or just encouraging in general. I had dressed pretty perfectly for this race. I had my craft base layer, a light windbreaker and my pacer shirt on top. I wisely doubled up on the gloves.

And as usual, holding the sign got just a little uncomfortable, but not enough that I felt like I wanted to ditch it. (A runner asked me how I could do it, and he's right, it's freaking annoying.)

We hit the 10 mile mark just about 8 seconds within pace, so I looked to keep on running strong. Did the old, 'a half marathon is a 10 mile run with a 5K race' and it seemed to cheer everyone. I started to count down the miles.

My stomach was giving me some issues, but I was able to hold that off for the rest of the race. Also, all the weaving and running in slush/ice/pavement, was making my left achilles ache a bit (I have to stretch it out tonight) but I felt I was totally fine.

In fact, I felt great, as I usually do well into a long run.

I shouted 'two stinking miles left!' at this point, which drew laughs, but I was ready to finish it off. I wanted to urge runners who felt good to go ahead, but no one was really taking the bait. At the 19K mark, I saw I was 5 seconds behind pace, so I told everyone I'd step it up a bit. We made that room up in the next two K. I remember looking at my pace band, needing to hit 1:34:34 at kilometre. We hit it in 1:34:40 and I got a wee worried. Pushed up the pace.

And a bit more.

Yeah, so the 20K was a tad fast. Opps. I wanted to urge people on but in retrospect, maybe I should have slowed it down back to 5 minute kilometres. The end was near and my arm was getting tired. So while I should have backed off, I kinda stepped it up a bit.

I didn't help that with 200 metres to go, some spectator looked at his watch and gave me a disapproving look. He wouldn't have known that I started a minute after the gun went off. So instead of going even faster and whooping it up, maybe I should have slowed it waay down.

Again, oh well. 26 seconds faster than 1:45 is pretty damn good in those conditions. Anyways, I brought the entire gang to within 10 seconds with a kilometre to go. I think the job was fulfilled.

Had an awesome time. Love pacing. But I think I gotta find a half marathon to race. 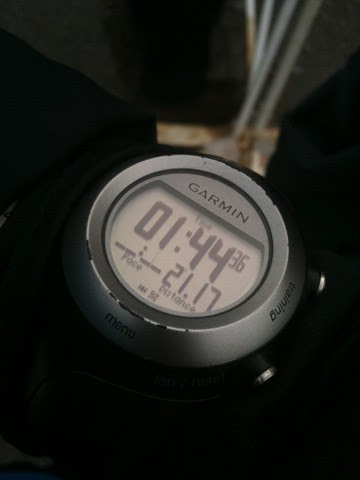 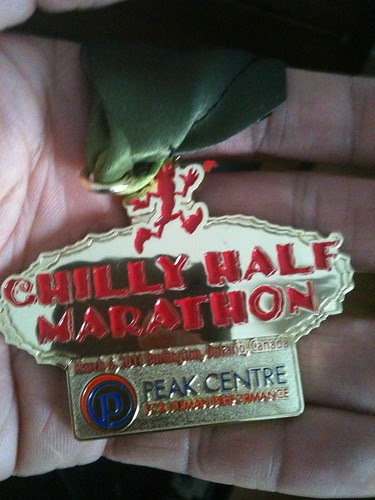 I ran in similar conditions this morning and it was not easy to maintain a steady pace and both of my feet were soaked after 5-6 km.

Congrats on fulfilling your pacing duties successfully on a tough day!

It was great to see you and run together for a bit. Would have liked to stick around, but... you know. ;)

Also sorry to have missed you at the finish. I was all caught up in my PB and forgot to look for you.

Thanks for all the support!! See you again soon. YAY RACE SEASON!

Too many ice cold soaker puddles and sprints to dodge people messed with my pace and head, so I had to watch you lead the rest of the pace group to glory without me after about 13-14 km. What awful conditions on the road ... Blech.

Either way, it was great to see you and can't wait until the next race!

It's amazing you came on time with the conditions! Good work. And thanks for sharing your story, sounds like a very unique experience for sure :)

I always appreciate the race pacers and I bet yoru group doubly appreciated your work in this weather! Way to go.

I've seen pacers pass around the sign to runners who want to carry it...

I was ready all week. Yesterday had stomach issues. Went to bed hoping it be fine in the am. Up at 6am, had breakfast & sick again. So, tough decision. Stayed home and complain all day. lol. next race, I was looking forward to be part of your pace group. last year, ran it in 1:47:18 and felt pretty good for 1:45 or so. See you next time. and congrats to all the runners who accomplished their goals.
regards Frank
aka Canadian_runner on twitter

Great job! We did a trail run yesterday morning and it was tough. Amazing job keeping the pace in the crazy weather.

Awesome job..I did see you holding the pacer sign...
as you passed me twice during the race. :)

Thanks everyone, it was a lot of fun.

Frank, sorry to hear about your stomach issues. I feel the pain.

And mark, maybe the 2 hour group one day.