In all my reading about marathon training, I've followed the discussion on the long run. For the novices and first-timers, the goal is to get you to 20 miles at least once. The thought is that on marathon day, a certain magic, a strange brew of tapering, race-day jitters and excitement can propel you to the finish.

The 26.2 miles is a cruel distance. The true race, a lot of us believe, doesn't happen until after mile 20 (or kilometre 32 or 42.2). If that's the case, then if we run 20 mile long training runs, then we doing really enter the true world of hurt.

The Pfitzinger program doesn't specifically call for any long runs more than 20 miles. It also calls for a moderate pace. Other literature out there suggests that runs of 22 to 24 miles could actually benefit you by stressing you, and, more importantly, give you the mental advantage of bringing you closer than the full distance.

I've tried to incorporate a faster pace for my long runs. I also decided heading into this run that'd I'd do more than the requisite 20. This training cycle (only 12 weeks) called for two 20 milers and my last one was during the 30K race, which meant it was only 18.7 miles. I raced it at a hard pace so I got a lot out of it, but I was setting out to do more.

I wore a singlet, shorts, and filled my four bottles with Gatorade. My route around DC was quite interesting. From Penn Quarter to Lincoln, then across to Virginia and the Mt. Vernon trail, then off to East Potomac Park for a 3 mile loop, then off to Rock Creek Park to the Zoo, then back to the Mall and then one final loop of East Potomac Park. That's a long run. 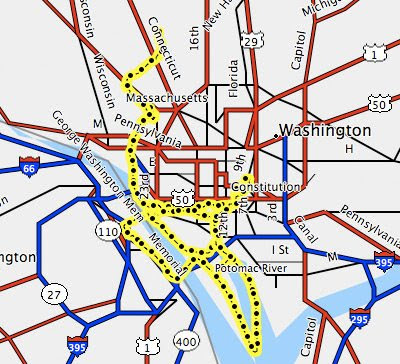 Long story short, mission accomplished. The splits below tell an encouraging story: I was able to up the pace throughout the run so that the last half was stronger than the first. The heart rate was also strong. I did the first 20 miles in 2:42, about 5 minutes faster than the three 20 milers I did last fall in advance of the Marine Corps Marathon.

Today also marked a huge milestone in this training cycle. I ran 23 miles or 37K, which only brings me 3.2 miles to the marathon distance. The last three were not tough but I could feel it. 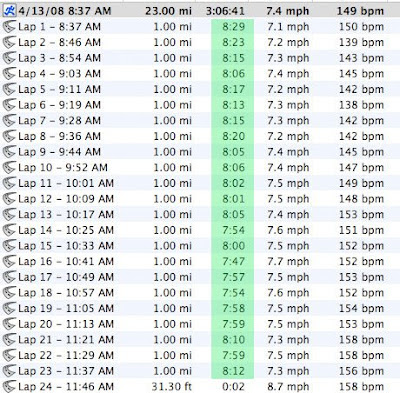 I think the weather really helped but it was also great that I was able to keep up the pace.
Posted by yumke at 5:44 PM

Nice job with the long run. Enjoy the taper.