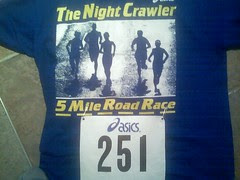 media1.jpeg
Originally uploaded by yumkerun
Sometimes it's better to run a race for the first time. The first time, you get aggressive, you don't think too much about the course, just run it. Other times, well, you think.. And that's not necessarily good, is it?

I lined up near the front of the pack, always respecting the faster runners who need to get out there. Somehow, you underestimate how many people you can fit into 10 metres. More than 100 runners by my count.

The Night Crawler 5 miler (8.1K) is one of my favourites. No mass starts, just 400 of your fellow hard-core runners with nothing better to do on a weekday evening before summer arrives. It's a (relatively) small race that brings out lots of speedsters so it has that pro appeal and the rest of the runners are the sort you can picture doing their daily runs. Lining up, you overhear people talking about BQing or running Chicago and Boston or running the marathon in 3:07. Before the race, people are doing strides, or just jogging to warm up. Another hard example, the larger Harry's Spring Runoff 8K I ran in April is comparable in distance yet its median time is 46:28. Tonight, the median time was 42:38 for the Nightcrawler race that's 100 metres longer.

Oh yeah, and they do BBQ at the end, with hot dogs.

Back to the race: It's also better to line up near the front because there is no chip system. I figure I lost about 5 seconds at the start to get to the starting line. I opted to run on the side (grass) in order to position myself up front. So that's what I (and others) did the first 500 metres, and that's when a small rock made its way into my left shoe. That left me worried for a few seconds, but didn't prove a hindrance.

One good thing about small races is that you can quickly get into a grove. The field sorts itself out by the first kilometre and by the second, those who started out too fast are already fading away. During the 2-4K section, I felt like I was stalling. The group I was running with was at a good clip, but I felt I had to target the next group ahead of me or risk falling off into a slower pace. So for the first of four times, I decided to shed the group, hook on to a faster runner (or runner about 10 metres ahead) and surged a little. It proved to be fun and good practice for getting pace by feel and trying out different running gears.

One thing about losing my GPS after the second K was the lack of a stopwatch or pace to judge by splits. I ran this race by testing my pain threshold and trying to hang on and gain ground. But did I run it to the target pace? I don't think so. As a result, I spent probably more than a miles in between packs alone, trying to make some ground. Although I don't do hill training, it was on those stretches where I was able to make good moves to pace. I concentrated on maintaining stride speed. When I did catch up to other runners, I paced off them until I felt they were fading.. Or I stayed (in the case of the last group) for a good mile.

Last year, raced the course in a much more aggressive fashion. I ran the first few kilometres at a quick pace, then hung on for dear life. That provided me with (now looking back) an impressive 34:59 finish (a few seconds faster by my GPS). It was run at a pace of 4:20 Ks or 7 minute miles.

This year, even with excuses of a non-functioning GPS and mid-mile lack of drive, I managed a 35:42 finish with a pace of 4:26 Ks or 7:09 minute miles. Throwing that number into MacMillan pace calculator predicts a 3:30 marathon. A half marathon will be a better judge of my pace and we'll see in September how the training will help.

All in all, a good race. Those tempo runs in the next few months are going to be fun.

Nice race Yumke - something to build off of . What is your marathon goal this year?

Nice job with the race!

Great race, too bad about not getting a PB but there's always next time!

Thanks everyone...
Jellyp, make up your mind on the race for the 14th?
Ryan, not sure what the ultimate goal, but i'd like to do better than tlast year's time of 3:35..
Sonia, i know I can do better, so that keeps me motivated!