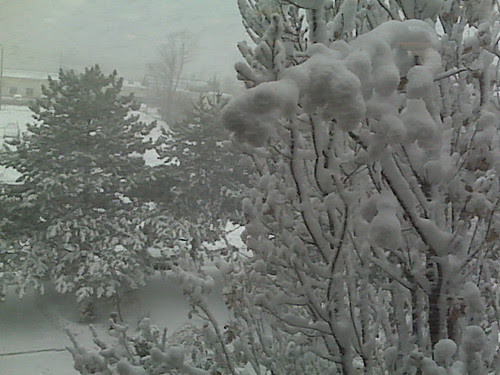 Well, that was interesting. The snowstorm did hit and as I reached the final part of my commute to work, our bus was stalled going up a massive hill.

The bus driver kicked us out and told us to walk up the hill and he'd send another bus. There were four other buses stuck. We waited as the snow continued to fall. A bus made it up, but it was the wrong route. Another one came up a few minutes later, the right one, but the freaking driver ignored 30 of us standing at the bus stop.

I was wearing jeans
And boots
And a sweater, zip full and a full winter coat
And a touque
And gloves.
Oh yeah, and a backpack with books and my MacBook.

So yeah, the run was a little hard. It was hilly, I couldn't find the sidewalk half the time cause no one had made tracks. 20 minutes later, three buses go zooming past me, so I could have just waited for a bus.

But then again, I couldn't have got in a 5K (3 mile) run in (with plenty of walk breaks to cool down).

hahaha you must have been pretty funny to see run in the streets!! It doesn'T get any crazier than that!