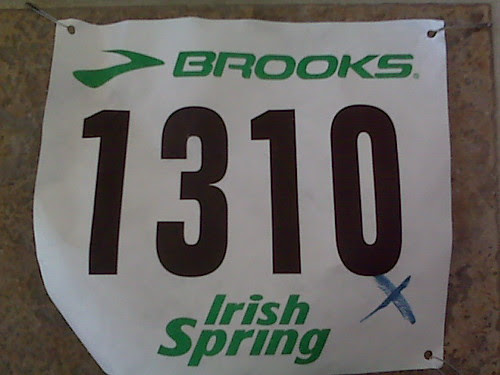 What a race day. Sunny, a little chilly with wind in Toronto, started off a little worried but that was erased by the end.

I ran my 30K long run yesterday morning, so my legs were pretty tired after that effort. I wanted to just stay in but it was gorgeous out so I walked to St. Lawrence Market to pick up pasta, a whole chicken and other good grub. I got back and I really felt it in my lower leg muscles.

So I spent the afternoon and evening watching TV, cooking, preparing my traditional pre-race pasta meal. I was out pretty early at around 10 p.m. and other than a call from R., I wanted to stretch, rest and get ready for today's race.

Up just after 6 a.m. and hydrated, ate half a bagel with peanut butter and a few mouthfuls of pasta. Back to bed and by the time it was 8:30, I was raring to go.

The race site is only a 5 minute walk from my condo so I took my time. I got to the race site with plenty of time to spare and I did a few 200 metre jogs and some striders. Then a volunteer asked me to guide a blind man to the registration area: "1310! Excuse me, 1310, can you help guide this man to the table." I didn't realize he was talking to me, but then I took the man by the arm and I guided him through a maze of runners. We chatted about the race. I told him the course was mostly clear since I'd walked it a few days ago. I asked if he were running or walking and he said he was running. The Achilles race is a fundraising for disabled athletes so it was a nice honour to be able to talk to this man. I brought him to the area and another volunteer intercepted us. He thanked me, shook my hand and I went back to the starting line.

This is really Toronto's first big road race of the year, maybe 1300 runners and you could feel the excitement. I lined up near the front as usual and I saw many walkers or slower runners had done the same. I saw my friend Fitzy, who's running his second race in recent times. I thought he had a 23 minute 5K in him. In the crowd was another friend from university who'd lost a lot of weight and got into shape.

Strategy: Okay, I am not a short distance runner but damn it, I always wanted to go sub 20 minutes. I haven't run many 5Ks in my life so my first big attempt was about two summers ago when I managed a 21:44. I imploded in the last two kilometres in a very hot day. Last December, I ran a unchipped 5K in 20:03 in a course that I am convinced was 4.8K or 4.9K which is a good 30 seconds. So today, although I knew I wanted to break 20, I knew running 18 miles the day before wasn't the greatest preparation. But I am in the best winter shape in recent years, as a result of my marathon training. And while I haven't done lots of VO2s, I have done two successful LT runs and my long runs have been very strong.

So the strategy was to run it by feel and see how the first kilometre felt. 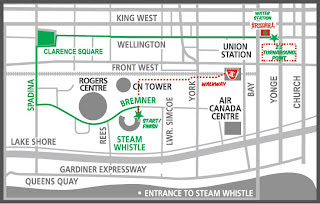 Kilometre 1: At the start, there was tonnes of congestion so that I didn't get into full speed until about the 250 to 300 metre mark (route on Gmaps). The first kilometre has a slight uphill followed by a plunge down another hill. After 500 metres, I felt that I wasn't even going at a hard pace. I decided to stay conservative. At the end of the kilometre mark, my Garmin went off and it said 4:01. I was a little surprised, but I knew then that I had more in me than I thought. This was the warmup. The race, really, had just begun.

Kilometre 2: We encountered two curves with plenty of ice so I hit the sidewalk to gain traction. This kilometre is mostly straight through downtown so the roads were straight. I targeted runners around me and we stepped it up. People were fading but I was feeling great. The Garmin said I did 3:45 but I think was off by at least 10 seconds.

Kilometre 3: As we neared the halfway mark, I saw the elites already turning and it gave me a little bit of incentive to run faster. At the turnaround, I took it wide, then quickly accelerated, shaking a few runners of me. That was fun. I also glanced at the watch and saw that I was sub 10 minutes, which was a great sign. I just told myself to hang in there for another kilometre and then I'd just gut it out for the final K. Garmin says 3:33 but we all know that's not true. It was closer to just sub 4.

Kilometre 4: I saw Fitzy on this stretch and waved at him. Also gave me a boost to see him doing so well. All of a sudden I realized how small a 5K was compared to my long runs. That all I needed was 8 minutes of discomfort. That helped big time.

Kilometre 5: This included going up the big hill we went down but luckily there was a group of runners ahead of me. I used them as bait and I reeled them all in. The hill was over quickly then it was only about 800 metres to the finish with a slight downhill. I remember thinking at this stretch that I had a sub 20 in the bag, it was just a matter of whether I wanted to gut it out. I did and passed a few runners. Some other runners were gutting it out too, so they passed me. But I didn't care. I saw Fitzy's better half and waved at her and barrelled toward the end. I did the last kilometre in the fastest time in about 3:46 with the last 200 metres at 3:37 pace. The clock read 19:37 and I pumped my fist. I wasn't breathing too hard and I was so very happy. Final time is 19:31.

So there you go. I can now say that I am a sub-20 minute 5K runner. I've come a long way as a runner and this is hard proof. Woo hoo!

Congrats! I knew you could pull this off!!! Major achievement for you! =)

Congrats, that's really fast! Are you going to do 30k long runs the day before all your races now? That's incredible!

Wow that is awsome, congrats on te sub 20. Not to mention is was right after a 30k effort! Sweet. Nice one to check off the list.

Thanks guys. I'm still kinda shocked and I'm going to do a gmaps pedometre on that course to make sure I actually ran 5K. But I know I pushed myself hard today.

According to this the course used to be measured and certified to be 5k. I noticed on the race website that there's a new route this year, but if they had it certfied once, it means they're pretty serious about getting the distance right.

Thanks Fran, it looks like it was a 5K course indeed. I'm pretty surprised.. oh well, nice to have a good race :)