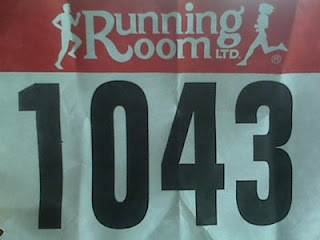 I think I'm going to call this the annual Resolution Run 4.86K run because every single year, it measures the same on my GPS. To the folks looking up your results, the course is not a 5K distance so any PRs are, well, unearned. This is in my opinion.

Anyways, I have not raced in, um exactly two months since the Marine Corps Marathon. The last two months i've gone into extreme maintenance mode.

The mileage has dropped dramatically in the last two months but this is not unlike the last two years when I also ran fall marathons. Running has been sparse the past two weeks partly as a result of a busy schedule but also because I've been feeling really run down lately and then I got sick on Boxing Day.

I'm on the up now and feeling about 80% physically, which is pretty darned good.

Had dinner with R and her family last night and then she flew out early this morning so I was up early. I checked the weather at first and it felt warm. Then I saw the weather alerts and then changed my gear three times. With about 5 to 9C with 70km gusts, I decided on tights, a skullcap, a T-shirt with a fleece polypro on top that I cold roll up the sleeves.

Out at 9 and I ran to the race site, a 3K warm up. The course is familiar. A lot of turns with two hair pins. We took off and I felt pretty good so I stepped it up for the first 100 metres to get up in the pack.

1K: 4:11. Saw my splits and felt ok. The breathing was not to laboured which was a good sign, but I felt still weak so I ended up pacing off a few people. This kilometre included a hairpin turn

2K: 4:24. It's a funny feeling holding back but this speed is a little slower than my lactate threshold speed, which in theory I can run a 10 miler to half marathon in. I coasted and kept on checking my breathing to see if I had the lung capacity and aerobic fitness.

3K: 4:22. I was running in the top 35 or so, kinda lost count. Not a very competitive crowd and I spotted a few runners that I felt I could catch up to. Another hairpin turn and the cloudy windy sky turned into bright blue windy sky. Beautiful, cold, chilly, and gusty.

4K 4:18: Passed a few runners and was passed by one. Was just using this run to pace and to push myself a little more than I have in the past two months. A nice feeling. Felt I could have pushed it more.

5K 3:31 (4:05 pace): The last .86 kilometres were good. I just maintained pace then kicked i up a gear in the final stretch. So did the other runners. I think if I was more competitive I would have kicked it even higher and overpassed a runner or two but I was just happy to run it strong. As you can see, the freaking split from the 4K mark to the finish was 3:30 which is impossible for me for a kilometre given the amount of effort I was given. I ran it at 4:05 pace which makes a lot of sense.

This year, I was about 45 seconds slower than last year but more than a minute faster than two years ago. Given I was running it two days after being sick and generally haven't been training hard, I'm very happy. My underlying fitness has not fled my body, after all. As 5Ks go, I've run 3 other races this year on courses that are actually 5K or close and I've gone sub 20 minutes on all three, two on very hot and humid days.

The race is special for me because it has always launched my winter training season. So as I was walking home, I was making plans to eat better, to research my winter races and figure out a training plan. First goal is to get the mileage back up to 35 miles a week by the first week of January. Then it's training time all over again. Nothing like a race to get your competitive spirit up again.
Posted by yumke at 10:48 AM

Good job Kenny! Too bad they can't measure the course well. The event was pretty early this year.

In Montreal, this cannot even be called a race, it's just a fun-run...

Ahh, this makes me want to run a 5K so badly!

(response to your comment) My Garmin has shown 4.91 both year I've run it. I don't know why they don't just move the first cone 50 meters down the street. As for the PR thing, this was my best 5k pace ever so it does mean something to me. Is it a true 5k PR? No but it's a personal best for a 5k-ish race. Can't just ignore it.