Confession. I charged up the iPod Shuffle and loaded tunes into it last night, knowing I'd be hitting the roads in -10C weather at 5 a.m. Freaking ouch. The early morning run is necessary because I leave home for work at 6:30 a.m. so to get in a 11 miler, I'd need at least 1:30 to do so.

The tunes were to help take a little bit of the bite off the run. I don't usually run with music, but the plan was to run 1K loops so it'd be boring and I'd be tired, so best to take my mind off it. It worked out surprisingly well. It was so early that I encountered very little traffic and
one other runner (we waved). As it turns out, I did 6 loops before I totally got bored and so I ventured out into the city to complete the run.

Midway through the run, I remembered why I love to run in the city in the early morning. I live a kilometre from the city's downtown core, and it's so cool to have the streets all to yourself.

The run itself was great. I was going to target my long run pace but I settled in for a faster pace (the quicker, the more heat I generate and the faster I finish the run.). 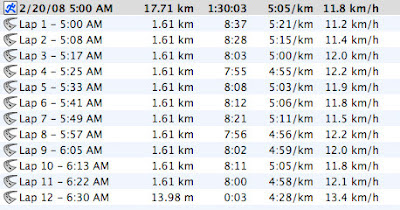 I recognize your dedicate self! Good job on the morning run, must be so hard to get out of bed so early these days!

Thanks sonia. It was very tough. But at least i got the run over with!