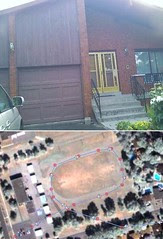 0618home
Originally uploaded by yumkerun.
It was a hot day today, and I did a 15K run (9.3 miles) on the waterfront. They were doing a father's day run and I managed to be in the perfect place where I was able to run 'with' the 10K leaders on the 'back' part of the out and back.

Was fun to see the sub-40 10kers weave their way among the jogging crowd who were doing the shroter 5K version. One girl was smoking the field and had to apologize while negotiating the crowd. I think she is owed at least a few seconds for that effort.

After 15K, I gave up with the heat and got ready to visit my parents in 'east Toronto', better known to me as Scarborough , back to the house where I grew up between 1979 and about 1996. I've run around a lot in that neighbourhood, biked, snuck through windows (like the little ones in the picture shown here). Of course, my parents are a bit warier and times have changed, putting bars on all previously accessible windows.

Around 3 p.m., as the weather was hitting 31 degrees (88 farenheit), humid with humidex of 37, I decided I wanted to extend the mileage a bit. I ran out to the very hilly area that housed my elementary school. When I was about a block from St. Ursula, I decided to veer off into a street I knew i'd run before and it brought back memories.

It's about 20 years ago, and yumke, at aged 10, is in phys-ed class running portion, which consisted of running around the track, then around the neighbourhood. The streets are wide, with tall trees providing ample shade. On the left and right are long patches of grass, with wide houses. The path weaves, and the little runners, in Grade 5, struggle to keep up with the distance. It feels like forever for us. We take walk breaks, only speeding up once in awhile when we catch our breaths.

I was on the cross country team in Grade 6. I remember one competition in which ran in wooded area against all the local schools, of the four guys in my class entered, I was third and (unexplainably) just made the cut to advance to the next meet, a city-wide affair. I still remember the asthma attack and walking the rest of the race.

Back to the present, I'm running the same course, backward, it's hot! and I'm keeping a 4:45 km pace (7:30 miles). I repeat as the sweat beads down my face, 'i am strong'. I pass the houses, marvel at the beauty (and size) of the houses. This is where I grew up. This was me as a kid. I had not run in that neighbourhood in 20 years. I get into the field behind the school. There are two kids, braving the heat, playing soccer. One's in goal, the other doing penalty kicks. I see the track and, just for kicks, ran around it once (see the pic above). I spot the place where I broke my ankle playing foot hockey (it's a Canadian thing, eh), I see the field where I distinctly remember chasing after friends, and also where my bat finally connected with the softball, one of the few homeruns of my youth. I see the back of the track, where we rounded time after time during recess and time after time while doing the various walk-a-thons or gym class.

In the less than 2 minutes that it took to run that track, I brought a flood of memories. I ran past the basketball courts, the school's front, and nodded to the little building, promising myself that it won't be another 20 years until I run around that little track. Maybe next time i visit the folks.

Oh, then came the mother of hills. 600 metres of straight and hard incline. I'll have to come back for proper hill training. Did 4.7K (2.9 miles)