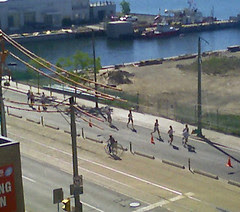 0611running
Originally uploaded by yumkerun.
I love living in an active area, the waterfront. Just as I was getting ready for my long run today, I look out my balcony and see that a 5K race was well under way. I think I was able to see some of the race leaders, followed by other runners. The pic here is of the semi fast variety (i think I usually fall in that category).

On Saturday, I set out to run 20K to the Beaches and back for my long run. I was out the door by 6:30 a.m. and it was freezing (7 degrees, 40km/h wind). By the time I reached the 5K mark, I felt that I would probably need a bathroom break sooner rather than later, so I came back home (completing another 5K). Ditched my hydration gear and actually went out to do a 10K city route, but the wind was crazy and my breathing was not good due to congestion. I was 400 metres in when I decided I was too cold, on the verge of getting sicker so I quit. Yup, walked back home and waited for the England game to start (which was why I was up early in the first place). So, a 10K (6 miles) Saturday.

Today was much better. A later start meant it was warmer and it wasn't as cold. So I did a slow paced 21K (13 miles) to the Beaches. Found a great rhythm for the entire run.

As I head into the final week before the training, I'm switching my running weeks (for record keeping more than anything) to a Monday through Sunday instead of Sunday to Saturday. So, this week's mileage is a bit of a cheat, eight days long.

What a nice pic!

thanks! not very good quality but that's what you get with a cellphone camera..