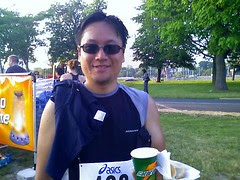 0621me
Originally uploaded by yumkerun.

My my, I love to race. Nothing like hundreds of other runners to inspire you to give your best, to push harder than on any other training day and to let you understand what it means to find your limits and, from time to time, break them.

It was a good race, and the conditions couldn't be more perfect for an evening run on the first day of summer. It was in the low 20s C range so it was slightly cool, perfect for racing.

A good showing, not sure how many people showed up. Because the starting line was inaccessible from transit, I ended up jogging almost two miles (3k) to the starting line. Hydrated, ate half a powerbar and hit the washroom before standing in a very very narrow starting line.

I lined up near the front and when we were off I had no clue, but people started running. I hit the first kilometre in about 4:10 and later found that the first mile was done in about 6:40. I had picked my starting point well. As my kilometres and miles clicked by, I pretty much held my own pace, and passed a few people. There were two inclines (and therefore declines) on the route, but it was mostly flat.

We ran about half the race on part of a highway, which was tough early on cause I needed to pass people and was hitting the outer edge of the pylons (and oncoming traffic).

I have to say that running on a home course had its advantages. I knew it and mentally, it helped to know how far I was away from the finish line. In the last two miles, I was slowing, but I passed about 5 people. However, some sprinters dashed by me in the last 200 metres.. 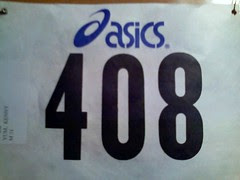 R. met me at the finish line (actually, I had to wait for her) and took the picture of me (above with hot dog and Gatorade).

Anyways, my Garmin says my final time was 34:54 and I know the official time will be about 10 seconds slower (update: my 'official time' was 34:59). Not sure how I did in the field but comparing this time to my best 8K had me faster by a minute.

And back to the regularly scheduled training. Speedwork accomplished.

PS: Second best part of races: guilt-free eating. They actually had Krispy Kremes (I had half) and I downed two small hot dogs from the race BBQ before buying some real street meat on the way home on the trail... Well, R bought it for me, so a nice $2.50 post-race dinner.

Thanks (and welcome to the blogosphere)!

Congratulations Yumke! Wish I could've been there to cheer you on (but you know I was there in spirit).

Congrats on beating your personal best for 8K

Yes, it's hot today, so i'm glad it was the perfect weather...