Packing it in and goal setting 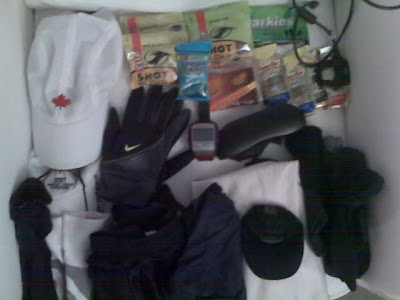 As for goals:
I am aiming for 3:20 again. I don't believe I'm ready to go for anything faster (ie. 3:15) until I know I can run a marathon in 3:20. My goal is to run it strong and steady, to fuel up properly before and during the race. My goal is to really fight through those last miles.

The hills, they are a massive challenge at the Flying Pig Marathon, but I've encountered hills before in a race setting. The weather, fingers crossed, is looking mighty fine, so I think that'll balance out the course.

I've now gone through two training cycles using the Pfitzinger program since last June and I've set five personal bests in the 5K, 8K, 10K, half marathon and marathon, so something is going right. I'm happy because in all those distances, I've managed to lop off a lot of time.

Has this been the optimum training cycle? I don't think so. I've let the diet slip several times and I did take the quick way in with the 12 week program starting in mid-February (though I was running good mileage as of Jan. 1, just not following a hard schedule).
Posted by yumke at 10:10 PM

3:20 will be no problem for you. Just a gentle reminder, START SLOW!!