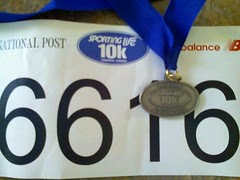 Well, it's done. As you see from the picture, I've got my finisher's medal. The first race of the season is over and i'm happy it's finished.

Had a hard time getting to sleep last night. Finally was in bed by 12:30 and I got up at 6ish so I could get some food in me (a bagel and half a banana)... Then milled around, finally settled on what i'd wear.

It was 5 degrees out and would be about 6 by 9 a.m. start, so I opted for shorts, a sleeveless top. For my shoes, I put away the trainers and went with my Asics racing shoes.. I decided also to bring my Garmin Forerunner to analyze the race..

Got our cab at 8 and proceeded to pick up the three runners. We got to Eglinton and it was a sort of festive air about it. I brought an extra large T-shirt that I could ditch...

Anyways, the four of us split up. The girls went to 'the back' of the group, while Frank and I lined up near the front. I planted myself exactly the same spot as last year (between the 40 to 49 minute signs... Frank was in the group behind me.

It was a race with more than 8,000 people, but who was lining up next to me but a co-worker of mine, one of the film critics at the Globe. We chatted about running (it was his first 10K and he was aiming for below 50. He finsished in the 45-minute range). It made me think about how running is totally open to everyone, from a 9 year old to 70+.

The race started, we took our first few steps, I said good luck to my co-worker then focused on my own game plan: Stick to the stride, pick a conservative slower pace, then start to pick your way through the crowd. According to my GPS Garmin, the first kilometre allegedly took about 3:49, which was way faster than my target pace of about 4:18. (Yesterday, I decided to shoot for two goals. The satisfactory one was to go below 44 minutes. The one i'd really want to do is to place within the 42 minute range: Thus 4:18 for a 43 minute 10k)

Man it was hard. We had a decline, then an incline. In retrospect, I thought I had more gas to apply, but I guess not. The downhill bits were fantastic. I basically threw myself down the hill and got great speed out of that.

At that point, I wasn't really paying much attention to the crowd gathered. It's actually distracting. There are people cheering for friends, running fans who are cheering for all of us, the police officers barring the vehicles from getting to Yonge and, of course, the people who had no idea there was a race and stood there staring at us.

Lots of signs though. My favourite moment was when, above on a bridge, I spotted a sign that says "Runners' legs are SEXY!'. I laughed, then checked out the pair of legs in front of me and nodded to myself, then realized it was a guy's pair of legs then had to go through some sort of 'it's okay I they're nice legs' moment. Apparently some guy got some signs for his girlfriend that read 'Will' 'You' 'Marry' 'Me?'... Apparently, she's now his fiancee and may not have finished the race due to the tears. Very heartwarming...

From Bloor to Adelaide was decent. I ran at slightly above my pace, then I missed the 7K gatorade/water station. I quickly lamented that. I hit the wall, mentally, that is. Runners started passing me and I felt i didn't have the legs to catch them. I believe this is where I started falling down 10-20 seconds a kilometre. I resorted to my breathing tricks (once for every two foot strikes). That didn't work.

I tried to have a conversation with the part of my body that was hurting, as all the running gurus suggest you do, but there were no takers... Legs? Nope, i'm okay. Arms? I'm sore, but not going to listen to you. Lungs? Breathing was fine. How do you talk to tiredness... not sure..

Then I tried counting every time my left foot hit the ground until I hit 50, then swtiched legs. It sorta worked. The final 2K were torture... I kept on saying to myself 'relax, you have a half marathon next week, no need to push it' while also convincing myself that 'if i stopped for a 30 second walk, that'd be good too'. But in the end, it was just this: 'Stick it out, 2K isn't that bad...'

So, I knew I had a shot at hitting under 44 minutes. And as I was running down the final stretch, willing myself to get to the finish line, I saw that the clock had just hit 43, so that I had a good chance of having a chip time under that. And that's what helped me step it up a notch in the last 100 metres.

Felt good. Everyone who finishes in that time are totally spent but happy. Why do we put ourselves through this.... Because we can... Also got into a big sneezing fit after. My allergies are back.

All in all, I'm very happy I did that well. If I hadn't hit the wall at 7K, i'm confident that I would have not lost that minute...

Now next week, the Mississauga Half Marathon.

WOW!!! I'm really impressed! That is an awesome time!! Congrats, you fully deserve it =)

Thanks! It was a fun run and a good way to start off training for the big marathon. You ran a 5k right? How did that go?

I did it in 33:00 mins =) I was 307 on 397... oh well, I'm still really happy about it. I was aiming for under 30 mins but wasn't expecting all the hills we had to climb, so overall I'm really satisfied! It was an amazing feeling, I'm going to participate in those events in the future!

I read that you're doing another 10k in Missisauga next week-end, so Good luck on that!! I really like your blog by the way :o)

Oups, just saw its an half marathon next week!!

Hey sonia, that's a great time. When I first starting running 5Ks, I used to do them in 30ish minutes, so there's always room for improvement. And hills are very hard.. Good luck on the 10K in June, would like to know how that goes..

Thanks for reading my blog. It's a fun way of tracking my training.

And yes, a half marathon in six days.. yeesh..