Today it's about fuel. Well, not just fuel, but also about running. I did my 19 miler (30.9K) with a bunch of out and back routes. Most of it was flat. It was cool, and very windy, which meant the first 7K were running into the wind, followed by 15K with a tailwind, then, oh mercy, the final stretch was with that same headwind.

Found it tough to keep the 5:30 kms (8:50 miles) with the shifting winds and the fact that I didn't really have a rest day into this long run. No worries, I was in it to get in the miles. Ended up with 5:37 kms.

Okay, on to fuel. I ate a Clifbar before the run and took a gel at the 1 hour mark and the second at the 2-hour mark. But I was feeling hungry. My stomache was still growling. This is good that i'm actually fuelling cause I usually don't eat before normal runs. I structured my route so that I'd end it near Union Station in downtown Toronto (only 2K from my home). There, I bought my first Gatorade, used the facilities, then walked 1.5K to St. Lawrence Market, where they had buskerfest. 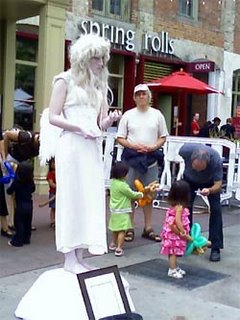 Which explains this picture here of some mime artist. At the market, I visited my favourite bakery and picked up two focaccias, six little puff pastries, three filled with potato filling (carbs!) and the others with spinach (popeye!). Then bought a small ravioli with meat and spicy sauce topped with cheese. Proceeded to gobble the pasta outside. I guess I was quite the spectacle, in my running gear, eating and, by this time, a nice sprinkling of salt throughout my body as a result of the sweat. Finished the pasta, then watched more buskers while munching on four of those yummy pastries. Walked the 3K home where I got another gatorade.

Thing is, I'm still hungry. So this is question for all of you. I am justified for needing this much fuel after a long run, correct?

Oh yeah, I ended up buying a chicken sandwich at Churrasco, the best in town.. I think i'll have that after my power nap.
Posted by yumke at 1:11 PM

If you're still hungry, then eat. As long as you're not gorging yourself on pure lard, it shouldn't be a problem. If you're not gaining too much weight, it'll be find. I find myself eating a lot after a long run also. It's a kind of reward for getting it done.

I agree, if you are hungry eat. I find after a long run I am anything but hungry, but an hour later - watch out! I am ravenous and need to eat.

Yup, i figure if i'm hungry, i should eat.. and try to avoid foods that are easy to pile on the calories (ie. junk)