Tomorrow's long run was supposed to be 17 miles, but damned schedules. After last week's 16, I felt I needed to run more, to reach the big two-zero, and I didn't want to wait another two weeks.

Tomorrow's also my 32nd birthday, which was on top of my mind when I set out to do my long run this morning, one day earlier. I'm thinking I may be having a drink or four tonight and it would be a bad idea to get up tomorrow at 6 a.m. for a long run.

With age, comes wisdom, or wariness toward post-drinking mornings.

So I set out, with a vague vision of doing 30K (18.6 miles). Then I started running, and it felt good. By the time I hit the 5K mark (3 miles) I decided to make this run count. Make it symbolic. I'd run a kilometre for every year. I'd run 32 kilometres and reach that 20 mile mark, not for my training program, but for me.

It's all in your head, I've always believed about these long distances. The ability to run for more than two hours is an amazing feat that once you get it into your system, you can find ways to do it well. It's when you hit the 10 mile mark and you're running smoothly and the heart rate is actually at the 75% mark, the measure of effortlessness. It's when you breeze by the other runners and only you know that you're embarking on a long, long run. Are they as well? Who knows?

Once I hit the 26K mark (16 miles), I passed a woman who was running at a good clip and as I passed and we were on the lakefront, the sun glistening off the quiet lake, she said 'isn't this beautiful' and I answered, 'yes, it is' with a smile, and with that, I turned on the jets. I would not end this 32K run, each kilometre for a full year, slowing down. I would take each successive kilometre and push it harder. And as I ran the last two kilometres, I quietly repeated: 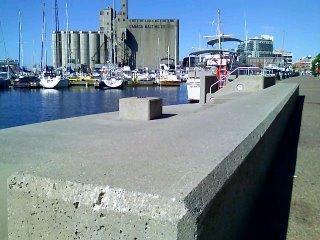 'This last kilometre, it's for me.' My mantra fuelled that last 5 minutes and as I approached the final stretch by the music garden, I thought of a little raised seating area in which I love to end my runs. At the end of my 5K sprints, i'd end it by leaping up on the platform and, for a few moments, run a bit higher. So with it in my sights, I turned on the jets, aimed, and leaped... 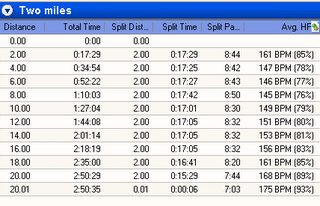 Happy early birthday. 20 miles...way to go! By this time tomorrow I hope to have joined you in that club as well. Enjoy yout b-day night out.

oh birthday boy, you were always the wise one of the bunch; as if i need reminding why you inspire me -- but you do, and do it often. thank you. a toast to your 32 years.

Outstanding run! Way to go! I am inspired by this, and perhaps for my 34th next month I may try to do the same...Happy Birthday!

Great job on the 20 miler and happy birthday! 20 miles depletes your carb storage so be sure to replenish (drink beer).

Thanks for the good wishes.. was a good idea to do the run before the actual birthday! Dave, it was a lot of fun to run your age in kilometres.. a much more manageable measure of distance