As i'm off this week, when 7 a.m. arrived and I sensed a hint of rain, I decided not to run. Then, two hours later, when R. and I were about to run, it started to rain. Then, we decided to stay in a bit longer. Then we went to her place, unpacked some stuff from the camping trip, and then proceeded to watch TV for 3 hours. Yep, by 5 p.m., we were out shopping, and it was then that I knew I had to get home and into my running gear.

As I said yesterday, I planned to do 16K (10 miles) today to catch up on the missed runs. But with a dinner with friends planned, I figured I'd fit in at least 10K then see if I can add a few more. I decided to run for an hour. So out I went, and it dawned on me that at a 5-minute km would take me exactly one hour to complete 12K. Out I went, and as I hit the halfway mark, I saw, according to my Garmin, I was just over 30 minutes. I decided to play a little game of, lets go negative split and do this run in under 60. What followed was the most fun tempo run i've done. I was racing against the clock, trying to run 4:30 minute kms. 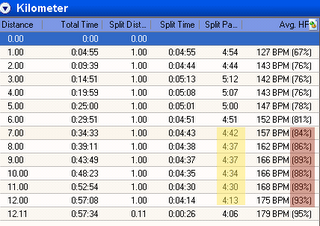