A very low-key day on Saturday. I picked up my race kit on Friday just so I wouldn't have to spend Saturday on my feet. We got up late, hung around the house, then found ourselves at a local pizza restaurant where I ordered spaghetti and a side of pizza (ha!). We rented movies, did a little shopping but was back at home for the early night. We watched a few movies and then I went on my way to prepping for the race: pinning the bib on, getting my gels (three), jelly beans and Clif Shot Bloks.

I was pretty pumped but was able to fall asleep while watching a movie, so I dragged myself into bed by 10 p.m. and woke up a around 3 for my first breakfast of a bagel and peanut butter. I had a short nap afterwards, ate some yoghurt and packed another half of a bagel to go.

The race start was a 8 a.m. so I knew I'd want to get there before 7 a.m. The Army 10 miler I ran earlier this month was around the Pentagon so I decided I'd err on the side of caution and found myself walking out of R's condo in Penn quarter (listen) for the 15 minute or so ride to the Pentagon. By 6:40, I found myself walking with hundreds of other runners towards the bag check area. It was still dark and it was really quiet (listen) but we were soon checking in our bags. I visited the porta potty then hung around until I saw a group of runners head toward the start line. I had no idea where that was since it was dark and I put on my prescription sun glasses.

We made our way to the start line and I found the 3:20 to 3:29 area in the corral. It was pretty close to the start and I sat with other runners on the ground to conserve energy. Over the next 40 minutes, more runners arrived along with some of the wheelchair athletes. I visited the woods nearby for my last pee break, ate a half bag of jelly beans, stood for the prayer and national anthem.

The pacers then arrived. I only saw the 3:10 and the 3:30 and was confused. I asked the 3:30 guy where the 3:20 pacer was. He's coming, the pacer said. So I wandered closer to the 3:10. A few minutes later, Jack arrived and we all huddled around him. He planted himself around the 3:10 area (and there were remarkably few people using the 3:10 and 3:20 pacers.) I overheard some of his instructions and about the hills in the first miles. I sized up the runners I would be pacing with today. They were fit, looking confident and loose. I realized how different it was for me last year when I ran with the 3:20 pacer. I headed into this marathon a lot more humbled, a better idea of what to expect and a lot more prepared. 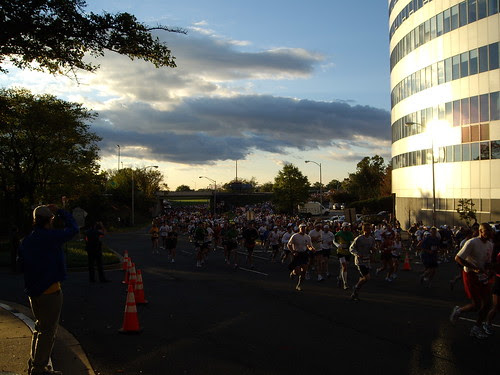 Soon before the start, after the anthem and around the time two planes flew by, a flock of Canadian geese flapped by the start line. I almost felt they were there for me and I smiled a little. I tossed my shirt, breathed deeply a few times, heard the horn and the second marathon of my life was under way.

Congrats on your excellent finish time! I had no idea anyone other than my virtual running group was reading my blog!

Thanks for commenting about my marathon experience. You're so right - I did hit the wall. I just didn't know before that this infamous wall was both mental and physical. I trained for this race alone, but I'm considering trying out another running club or finding a coach of some sort; however one goes about that. I just know I can do better and the thought of trying again is exciting, even as I hobble around the house today. :)