'Thank you for cheering us' 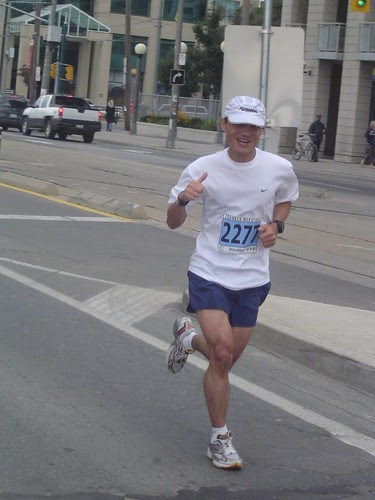 Here's a shot of Fran running by me at the 38K mark. He was doing great, his second marathon in two weeks and I believe he was cruising in for a strong marathon time.

I knew today was the 'other' Toronto marathon. We have two in two weeks, which is insane. I still believe these two events should find a way to combine but I think that's not going to happen. One is going to build steam while other stagnates.

I'm not blogging about marathon politics, I'm blogging about supporting my fellow runners. I saw this marathon had be rerouted this year so that there is an out-and-back portion that runs by my condo's front door at the 23K and 38K marks.

So I got in my 16 mile run early, showered, had breakfast and was ready at 10 a.m. for the first runners to come through. It was me, a few cops, and the stray pedestrian on the sidelines. I saw the first runners who were moving at a great clip. I saw the first women, the sub-3s and the early 3 hour marathoners. Fran came by a little faster than pace and we exchanged a few words. I was too busy cheering him that I didn't grab a picture. (I took the pic of him coming back).

I continued to clap in and cheer in every single runner I could. If you were in a pack of four, I'd say 'Great job runners'. If it was just one or two, I'd clap and say "good job, nice work, good pace, looking good runners.'

People who live in run-crazy cities and big marathons have it great. They had thousands, hundreds of thousand and even millions of fans. I swear I was the only vocal spectator over at least the distance of a kilometre, there was barely anyone out there to watch the runners. To put it into context, my street has dozens of condos where thousands of people live.

I got to speaking to a police officer and we talked about running (I explained about the wall, about shoes, about running form, about how amazing these runners were for tackling the distance.) We broke from our conversation every few seconds to both cheer for runners or for her to shout at cyclists and drivers who wanted to get into the lane. One driver asked the cop 'what charity are they running for' (no charity, you moron). One cyclist was pissed off and asked why he couldn't run in the mayor's neighbourhood: 'who's stopping you,' shouted the cop. She was hilarious and great at encouraging the runners.

Over the 3.5 hours I stood cheering for all the runners -- during which I saw most of them twice on the out and back -- I received so many smiles, so many acknowledgements like a simple wave or a nod or a thumbs up. So many times, runners looked up and grinned (and you know how hard it is to smile at mile 24). Many said thanks but I was more thankful for them cause they make this running thing possible.

'Thanks,' they said, one by one. I remember one group that I cheered on the way out were coming back into the final few miles of their marathon, and I was clapping again: 'Thank you for cheering us,' said one of the women in the group to me. 'You're welcome,' I said, smiled, then cheered on some more.

That, my friends, is huge inspiration for me as I count down to marathon day.

Here are more pictures as a nifty slideshow.. My full set is here.

Hey thanks for the pics and for coming out the cheer. It makes you wonder why more people don't come out to watch. It's nothing compared to Chicago but I think the fan support for this marathon and the new course is much better than for the scotiabank one.

I almost didn't recognize you on the first pass. I think I've only seen you in running gear so you look different in normal clothes!

That is very nice of you. I am celebrating my 1 year marathoner anniversary today (well tomorrow really but the marathon was today this year). Anyway, I can tell you that people cheering on the side of the road really made a special marathon for me so thank you for going out there for almost 4h!!

Great photos! It so great to give back to the sport like that - and I bet it felt more encouraging to the runners than the walls of people in Chicago...