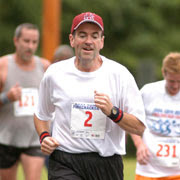 Watching the Iowa caucuses tonight was fun but one thing I've been keeping my eye on was Governor Mike Huckabee who won it for the Republican side in Iowa. I've heard about him of course by all the press he's gotten in the running press in recent years about his huge weight loss, his running routine and about marathoning. I'm not a social conservative, but I do appreciate that this guy is running for president and also an avid marathoner (and also training for one right now). It takes stamina, guts, intelligence, commitment, pacing for both.

His running credentials are pretty good. He did the Marine Corps Marathon in 4 hours, 37 minutes and has done three others, including the Little Rock Marathon in 4:38. Huckabee did the New York City Marathon in 5:38 with a sore knee and the bib number of 110 for the number of pounds he lost. (More results here) Also was named a Hero of Running by Runners World in 2006. He's also training for the Boston Marathon with Team Hoyt. Good on him, I say.

Here's what he said tonight, and we're about to hear a lot more running (the sport) references over the next while while he gets a lot of national attention. And that's a good thing, given all the negative things that have been said about our sport recently.

"I would say that this is probably about maybe a half marathon," he told reporters. "We started out a year ago and we've got a year left...For me, it's a gut check. Regardless of what position we're in, we still see this as a marathon, the finish line is November, but tonight we hope to prove we're in this race for all 26 miles"

So I wonder if he worries about hitting the Wall. Democrat John Edwards probably knows too, cause he's also a big runner.
Posted by yumke at 12:01 AM

Thanks for the profile on Huckabee. Didn't realize he was such a committed runner.

Maybe you'll blast by him in Boston this year.