I remember writing about the aches and pains that manifest during the taper. Little did I know that one of those aches would cause a major worry right until the starting gun.

I ran in Toronto last Wednesday, a double run in the morning, the first a pacer, the second a recovery run. I took the day off work Thursday because I was into my 10th day in a row at work as a result of an unexpected weekend duties at my job. Thursday was a godsend. I caught up with sleep, started to pack and finally think about this race. I've been trying not to think about because other things have been on my mind.

With extra sleep in the bank, I started to notice that my left foot was starting to ache. It was a dull pain that registered every time in my toe when I took a step. It was not in the bone, and I could stretch my toes, but every time I landed on the ground, I almost had to wince. I thought nothing of it and just thought It'd go away.

On Friday, I was the first from the convoy to arrive in Cincinnati, arriving just after 1 p.m. I cabbed it into the hotel and found the expo was right next door from the Millennium where I was staying. So after getting into my (very nice) room, I went to the expo. There was a steady stream of people and within an hour, I had grabbed my chip, shirt and bib and also raided the Asics area for a hat, a hilarious T-shirt ('I'll run a marathon when pigs fly') and an Asics pullover fleece. Also hit the drug store for Gatorade (fuel), breadstick mix (fuel) and muffins (fuel).

I walked around downtown, had lunch at Potbellys at the Fountain Square. JellyP, who drove down with CMan since Thursday night, texted me to tell me she was too bagged to get dinner so I waited for R. to arrive from DC for late noshing. We went out to an overpriced Italian joint that had pretty good pasta (penne with bolognese and a few refills of bread). We went back to the hotel and settled in. During the night, I told R. how my toe was really starting to bug me. When I was carrying my dufflebag, I could feel myself actually limping. The rest of my legs were compensating for the pain. Walking was like this: Step (ow), step, step (ow), step, step (ow).. you get the picture.

I got up early on Saturday to see how dark it was at 6:30 (it's dark) and went out to grab a small bag of fuel at the bagel store. The wind was howling, it was cool and it was pouring! had a breakfast (egg, sausage and cheese on sesame) and watched the beginning of the 10K. I was so surprised they had a good showing considering the racers had to wait in the rain for the race to begin. JellyP and family pulled into the hotel next door and we did a quick drive through the course. We toured the hills and we had a major freakout driving through miles 5 through 8. Part of it was because we (in retrospect) took a wrong turn and encountered some deadly hills, but we also previewed the right ones and knew it'd be a massive challenge.

They did the expo thing after and we had a very late lunch (3 p.m.) at Rock Bottom Brewery, where the girls did the beer sampler while the boys didn't touch any alcohol. I was the only boy racing, by the way. I guess the girls thought were fine since they were doing the half. I had a club sandwich with slaw but had a few of R.'s nachos. 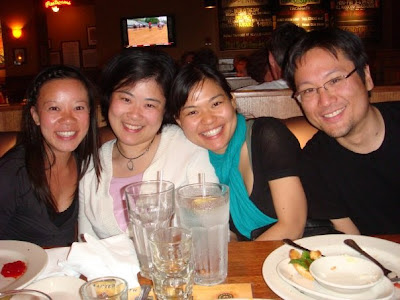 Photo: The half marathoners (JellyP and family) and me.

We finished, parted ways, made it back to the hotel while JellyP and family went to her sister's inlaws in Kentucky to watch the Kentucky Derby and drink Mint Juleps. We watched the derby, was happy and sad about the outcome (one glorious victory, one untimely death) and R. nicely went down to get me some linguini and chicken from the hotel resto. It was, well, store-bought quality but I was happy to carb up.

I guess I should back up and reintroduce the toe problem. We hit the expo earlier in the morning. My foot was still hurting and I was starting to really get worried. The toe area bears a lot of weight in each step. If I was experiencing pain for every walk, could I 1) sustain a run 2) sustain a pace run for 26.2 miles? I picked up some Motrin (ibuprofen) and took one in the morning. The pain dulled a tiny bit but it was still there. I could go on my tippy toes, but when /i walked it hurt and when I put pressure on the fleshy part between the big toe and the second one, it really hurt.

At the expo, I saw a booth had for sale a product called IB-RELIEF. It was a ibuprofen cream for muscles and joints that also reduced inflammation and helps increase mobility. I'm not a type of guy who jumps at taking such medication but I took a few glances at R.

I thought it was hilarious that there was a sampler there. I mean, you put it on and wait for a few hours? I followed two other racers who were having similar discussions that R. and I had. Before lunch, I put on some around the toe. In a few hours, the pain definately was reduced but was still there. I read the back of the package, it said 'May take 48 to 72 hours to become effective' and I prayed that this 'may' thing was applicable to me.

After dinner, R. and I walked down to the starting line by the football stadium. It was so quiet and dead. It reminds me of what the SkyDome area of Toronto looked like 10 years ago before they put up 20 condos in its vincinity. We plotted out where she'd camp out the next morning. I went back to the hotel, put on more cream, was happy that it was starting to work, and went to bed after 9 p.m. My bedtime reading was a printout of the race strategy from the Pig website.

I slept very well given the circumstances. At 2:15, I woke up, ate a bagel with some Gatorade, did a washroom break, went back to bed. At 4 a.m. I got up and started to dress, had a banana. I was shocked that my toe didn't really hurt when I walked, just a little hint of previous trouble. I applied more cream and then put in a Motrin pill with my gear, just in case I needed it during the race. The night before, I had done the bib, the chip, so it was just a matter of putting on the clothes, and getting ready. I hit the washroom a few times and was out the door at 5:25.

The lobby was buzzing and I went outside. It was dark, so I had abag with my shades for later, a jacket for after the race, a phone to call R. with to coordinate after the race. I made it to the race site and there was a nice crowd. I checked my bag, took my fuel and hand warmer (cool call on my part) and headed to the starting area. The corral for sub 3:30 was prety empty, but I got there before 6 a.m. and started to stretch. Over the next half hour the pacer Chris arrived, and more racers were in the area. I did a pee break about 6:10 and got back to the crowd. We were settling in sardine-mode when they announced that the race would be delayed 15 minutes and that there was a three-alarm fire on the race course. They said they needed extra time to divert the course and that by the time the first marathoners were there, it'd be all taken care of. We heard the announcement and that got us buzzing but the time went by. Nerves I guess.

The countdown came out of nowhere ('50 seconds!'), we all got our game faces on, I was within spitting distance of the pacer and the gun and we were off.
Posted by yumke at 8:04 PM

They say never try anything new on race day (re the ibu cream), but I guess it worked out for you in the end (or did it?).

I enjoyed reading your pre-race report about preparing for the Pig. I'm currently in the middle of writing my race report to post on my blog. I look forward to reading about your experience during the race!