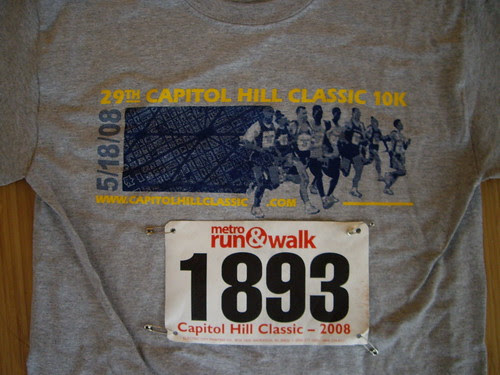 It was only 14 days ago when I ran the Flying Pig Marathon but a week ago, I saw that this 10K race was on and was excited to sign up. The race is in DC and it loops around RFK stadium, features some running in some beautiful neighbourhoods, a plunge down Independence past the Capitol Hill, then up the hill again in the last mile or so.

I was up early at my customary 3 hours before race time to eat half a bagel, then back to bed. The race began at 8:30 so I left R's place shortly before 8 a.m. and did a warmup run of 2K to the race site. It was slightly cool, a little windy but otherwise a perfect day for a race.

It was a pretty good crowd gathered there. In all, about 2,300 runners were slated to run the race. I arrived, did two striders then settled in for the wait. I couldn't stop yawning -- I guess I was still tired and not that apprehensive. In my mind I wasn't in 10K race shape without hurting myself so my goal was to do about 4:10Ks to bring me in around the 42:30 mark, with my mind set at going sub 42 minutes.

A lot of speedy people -- saw a lot of logos from local races (10 milers, 5Ks) and a few marathons (National in DC, Las Vegas). They ended up delaying the start (ha! again!) for about 10 minutes and we were away.

I started off conservatively. I didn't want to go out too fast like I did for my last 8K so I wanted to run at a 'comfortably hard' level. A lot of runners started off really fast but I kept my pace in check. After about 500 metres, I saw my Garmin was flashing a pretty fast pace so I slowed it a tad and settled into it. My first five kilometres (which could have been off by a 100 metres) were

So I hit the 5K mark just below 21 minutes (20:58ish) and I knew that this was not going to be one of these PR days given the big hill at the end.

During the first half, I was just pacing and doing a little moving forward, picking people off who had gone out too fast. I passed a guy around the half way mark who I overheard at the start saying to someone he wanted to run a sub-40 but had 'just started training.' I passed the other guy a few kilometres later.

Since this run was just a tad quicker than my targetted LT runs I just treated it like it. We hit two water stations, and I took them quite well, not really slowing down much. I shed a lot of runners in the next bit. Some where breathing hard, so I consciously checked mine and it was going well

Then we hit the hill on the down side, and my 7K time shows me speeding up. I was passing a lot of people on downhills. Maybe it's because I've run a lot of hills during my past three races, but I took them well and maintained my cadence. The next kilometre saw the turnaround, which I took wide (not losing much speed) and made some ground

Then came the hill. It loomed large and I was confident I could take it. There were several packs of runners ahead of me in the next 150 metres. I was running alone at this point and I reminded myself to 1) quicken the strides 2) run at the same effort but allow the pace to drop 3) monitor my breathing to make sure my heart rate didn't go go high or my breathing to foot fall pace to drop. I took the kilometre including the hill in 4:18, which was quite good. I passed all the runners ahead of me and I knew that as I crested the hill that should turn up the pace for a bit to settle into a quick rhythm again. 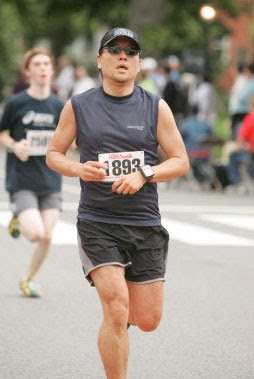 I looked at my watch and I had about a kilometre to go. My heart rate had spiked and my breathing had increased but I poured it on a little while taking deeper breaths. I targeted even more runners ahead of me and started to gain on them and passed them. We hit the final turn and I knew I wouldn't go sub 42 but still had a strong end to it. I saw the photographer, mugged for him, then turned. Saw the finish line, gunned it a little more, saw R., slowed down for her to take a picture (didn't work) and then gunned it again to the end. Final kilometre in a quick 4:04 and the final 200 metres done in about a 3:37 clip.

Final chip time was 42:24, my third fastest 10K I think but given I'm two weeks out from marathon and treated it as LT/race, i'm pretty happy. It was a fun race with a great vibe. I'd do it again for sure.

Photos from the race can be found here, google searchers. 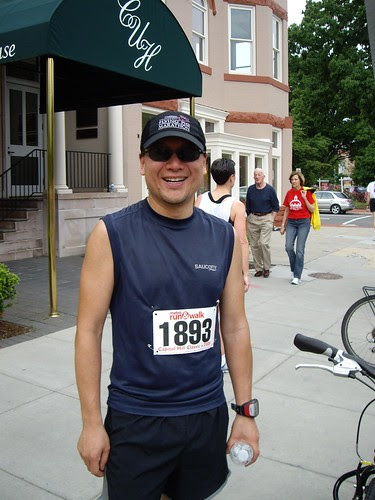 Pretty nice race you ran, top 10 percent for a training run. I was happy with my race too, two weeks after Cincinnati. Your report sounds like mine (but a lot faster) and the run through the 'hood was nice but it was so much better last year when they did a dogleg to Eastern Market (since burned) and ran in front of the Capitol and then up the formidable north side of the Capitol. But hey, 9/11 happened and the current clown has made us so much safer that we now have to fear sweating people in short pants and singlets running on the roads around the Capitol (security issues forced the race course to change this year). But yes, this race is a keeper in any form. Hope you're enjoying DC, there's great running here.

Another good race! =) You look pretty slim in that pic! I'm jealous of your marathon shape, this limited/no running business has been kiling me weight wise..

Great report! It's fun to get away to other places for races. You're a speedy runner! Well done and keep up with the great training!

Thanks guys, racing is the payoff to your daily training runs.. or maybe just an affirmation of all the work you put in.

Thanks Peter, it was good to get a tour of that side of DC. I run alot in the Mall, West Potomac and Rock Creek way, but not in that part. I need to explore more as I train for MCM.

Thanks sonia, I think i'm quickly falling out of shape (funny how a few bad eating days will do that to you) so i'm back to eating well as much as I can until I get back into major training!