A great day for racing and even if the conditions and the course weren't perfect for a fast 10K, I ran my heart out and smashed my personal best. Yay for marathon training and a big cheer to the Pfitzinger program.

I was pretty tired going into today's race. My brother and I stood through the Van Halen reunion concert -- tonnes of fun, we had 23rd row tickets and had a great view of the stage (Yes, they placed Running with the Devil to my delight). But with that and making the trek back to my parents' home on public transit meant I was on my feet all night. I took an old bed at the homestead, and was in bed by a late 2 a.m. 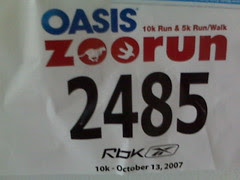 I opted for extra sleep instead of eating an early breakfast. Out of bed at 7:20 a.m., changed into shorts, singlet and ate half a bagel with peanut butter while hydrating on Gatorade. JellyP and her sister arrived at my place after 8 a.m. and we headed north to pick up their cousin. They are doing a family run, which is a cool idea. We made our way to the zoo and I saw that everyone was wearing late fall outfits -- long sleeves, jackets, etc. I quickly decided that the wind -- and lack of sun -- made it too chilly for me to wear a singlet so I quickly changed into Saucony long sleeve zip-top.

We got our chips, checked our bags and proceeded to line up with hundreds of others for a lot of portapotties, but with 12 minutes left to the start, I decided to find, er, wilderness to help relieve last minute duties.

I lined up right at the front, calmed myself, and went over my mental checklist: 1. Don't run the first kilometre too fast. 2. Remember to hang tough in the middle miles/kilometres 3. Save some energy for the final kick.

I also flashed back to my personal best time in the 10K distance, set two years ago in a net downhill course called Canada's fastest 10K. There are so many downhill segments that I think it boosts your 10K time by about a minute if not more. The time was 42:01.

My goal was to do what I thought I was capable of. I managed a 4:22 k/pace for the half marathon two weeks ago, I have done 4 to 4:15 paced lactic threshold runs and my track work is aimed at a 4-minute K (5K pace). So my target was to try for 4:10s and faster if I could but not too fast. If anything, I wanted to be sub 43 minutes.

The course winds its way through the zoo, and I counted about 14 turns that were more than just little curves. A lot of them were hairpin turns (you know, the kind that makes you run around a pylon.) It also has a lot of hills -- downhills, uphils -- and it's slightly net up hill. And when I mean uphill, I mean there are some major ones.

Note, my splits are kinda off cause the Garmin registered the run as 10.15K. I did note the time at the 5K mark though.

I took off with the lead pack and made sure that I held myself back a bit. I didn't want the heart rate and the breathing to get too out of hand. It took a little bit of discipline to do so and I clocked past the 1K mark at about 3:56.

The next few kilometres were actually some of my slower ones. I did 2K in 4:15 (it included hills, net 1.5 metres uphill) and the 3rd kilomere in 4:15. Part of this was that in the group I was running with, I was pacing with two runners, both of whom seemed to be going a little bit faster than they wanted to -- you can hear it in their laboured breathing. I made my move and dropped both of the and targetted runners ahead to pace off of.

Kilometre four was more of the run of the mill ones -- just get through it, I thought, these are the middle miles. I grabbed a cup of Powerade and practiced drinking at race pace and it worked quite well, actually running alongside others who didn't grab fliuds.

The fifth kilometre was a nice one, I was really fighting to maintain my pace and I knew that I'd have to push up the effort to make sure I can finish this race strong. I wasn't really memorizing my splits so I knew that the 5K mark would be the easiest way to gauge how I was doing. I remember running strong but just right up to the limit that would make running too hard so that my heart rate gets too high. This section had a nice downhill, so I coasted off it and make sure I ran down fast and relaxed without as much effort so my heart rate could ease off a bit. I hit the 5K time in 20:51 which to my memory is one of the faster 5Ks I've done within a 10K race. I also knew that I was on track for a sub 43, but it would mean a harder final half than the first 5K

I could be corrected, but I believe the 5K to 6K mark is where we had our major hill. My Garmin says I climbed 15 metres in that time. I do remember a few things. That it was long and winding. That it was also on these sections that separated the trained from the well trained. Other runners were losing steam and it was the hills that broke them. I took them smart and accelerated through them. We had actual stairs at one point (about 6 steps) that I took by twos. What an odd thing to have in a race. Despite the climb, I did this kilometre in about 4:14

The next three kilometres were just pure guts to hang on. I was running among strong runners (those who go out too fast usually are out of the picture by 5K). We were pacing each other and pushing each other. There was a small out-and-back so you could see who was about 200 metres ahead of you which was motivating. I saw one or two people who I caught up to and passed in the final kilometre in this stretch. My Garmin problems aside, it looks like kilometres 7-9 were strong ones.

When I hit the one mile mark to go (about 8.4K), I pictured four laps of a track. I knew I had to pour it on and my legs responded. I had another boost of energy in the last 500 metres. Final kilometre done in about 3:59 pace and the last 150 metres was done in a 3:38 pace (the speed I usually reach during my strides. I hit the final few metres, saw 41:xx on the board, and pumped my fists as I passed.

Final time was 41:21 a 40-second personal best on a challenging hilly course compared to the downhill and straight course where I previously PRed. One amazing thing (if the 5K marker was in the correct place) is that I ran the first half in 20:51 and the second half in 20:30, a negative split in a race. The hills definately were a factor, but both in slowing and speeding myself.

Here's the race elevation in green. 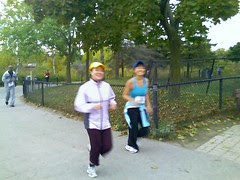 I finished and waited for JellyP and family. Snapped picture of JellyP and her sister with about 400 metres to go. We were cold and tired so we decided to leave the zoo and grab some food -- congee, smoky noodles, lo pak go and fried dough. The best comfort meal ever.

I'm extremely happy with this effort and it's another signal that I'm doing the right training. Does this mean I'm prepared for a 3:20 marathon? I don't think it's the only indicator of success, but I have set two personal bests in the past two weeks and they are both big breakthroughs, so I'm going to take it as a positive sign. If anything, my running season has been a great success already.

Maybe it wasn't you I saw-the guy I thought was you was wearing a short sleeved red race shirt and shorts.

I also thought the distance was off. Maybe they measured it off a bit or maybe it's being on the outside of the pack during those many turns!

I'm pretty sure you can handle 3:20 with no problem. You've got a great cushion between your LT pace and and your marathon pace which should make for a marathon which should feel effortless (relatively speaking).

So Mr. Cheetah, I think you're ready to chalk up PB Number Three in 15 days.

I'm not sure the distance was off, it seems like we were off 100 metres at some point...

Fran, I like that cushion between LT and marathon pace. I really want to run a smart even-paced race... here's hoping

Two PB's in two races! Good things come in 3's so guess you're heading towards something special in a few weeks! Way to go. -Frankie

way to go. congrats on yer pb at the zoo

Thanks Frankie and R. I'm excited and am looking forward to a strong race...