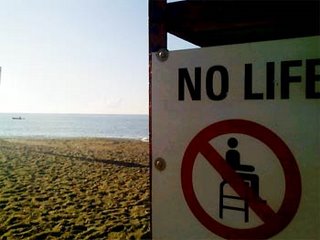 I love this picture.. it's actually, no lifeguard, but to me it looks like you'll have no life if ya spend it sitting down..

I can't complain, the weather was fantastic this morning. A cool 16 degrees by the time I started the run and only 20 two hours later. I set out on my long run aiming for 24K (15 miles). Went east toward the Beaches along the water. 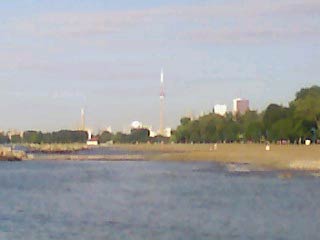 Only a few runners at 7 a.m., a bunch of cyclists and then, at the 5K mark, a massive group of people partying by the water, a massive sound system pumping techno. It helped wake me up.

Took some pictures at the halfway mark, including a shot of the city skyline from where I was (12K out) and a shot of the dock and the lifeguard shot above.

I'm doing my long run pacing by using my heart rate monitor, not letting my heart get up to the 80% range. As a result, I feel like i'm running much slower than I'd like to train at, but it's good, cause after my run, I actually don't feel really tired. I ran the first 21K (13 miles) in 1:54, which is about 10 minutes slower than I'm used to training for the half marathon and 20 minutes slower than my best racing times for that distance. Well, as the mileage creeps up, I guess I shouldn't be comparing my 13 mile pace to a 26 mile pace... 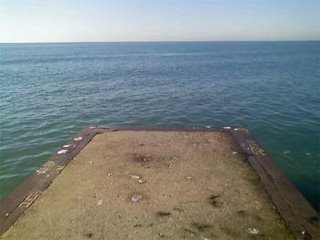 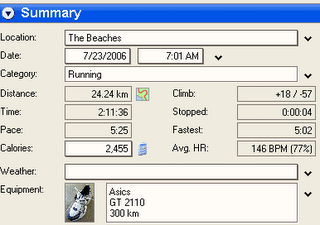 I saw those party people the other week too. Can't believe they were still out from the night before...and going strong! Anyway, good stuff on the run. Was a great morning for running!

That is so funny that they were still going strong after the sun came up, or maybe they were just getting started.

frankie.. it was a perfect day, i can only hope we have more of them in the next month, but i'd be dreaming, wouldn't i?

bob, thanks! i was reading more about the pfitzinger plan and wondering if i was running my long runs fast enough.. sounds like your run went very well tdoay

If you're talking about the party at Cherry beach, those guys (and gals) are always there every Sunday. They're refugess from the Guvernment night club which kicks everybody out at dawn.

Running by HR forces you to run slow, which is important for building endurance. So you're doing the right thing.

hey, i was at the beach too! if i had left when i was supposed to leave, perhaps i would have run into you.

good work on the run!