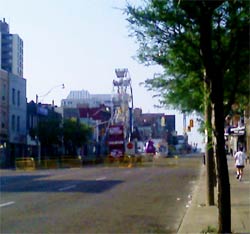 So the running got the better of me. I set out to do about 13K (8 miles) but the beautiful day, the quiet streets and the challenging hills made it impossible to only do 8 miles...

I think it's a good idea to get out there running by 7:30 on Sundays. The traffic is quiet, the streets are cooler and the sun is still striving to reaching its highest point, providing me with plenty of shade. Today's was supposed to be a LSD, so a run in the 75%ish range. I found myself bumping into 79% and over 80% on the hills. I wanted to hit my normal (and soon to be boring) stretch of waterfront, but I knew I should change things up just to keep things interesting.

I mapped out three or four routes on my computer, all I haven't done before. I settled on a run up north to the beginning of the Sporting Life 10K run that I've done the past two Mays. It would be a 8K or 9K there, and then I'd more or less run back.

Man there are monster hills in Toronto. There's one that's probably close to 800 metres, maybe a km and it keeps on going up and up. How do you keep your heart rate low when you're doing hills?

I got to Yonge street (the world's longest, some say) and remembered that they were closing the street at some major intersections for a weekend street festival. 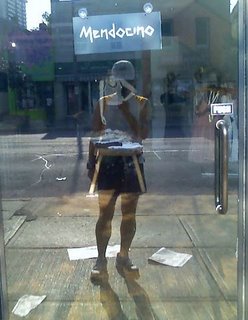 I also took a quick picture of myself at a storefront. Thought it'd be cool.

So I ran down Yonge street, at a much slower pace than those races and finally got to enjoy the view, the hills, the cute shops on street. I waved to several runners who were on the same route. It was generally enjoyable. When I was about 4K from home, I decided to make this 8-miler turned 10-miler into a 13-miler (half marathon, actually, 21.1K). So I did a detour and finished my run at 21.8K (13.6 miles) at 1:50:46. 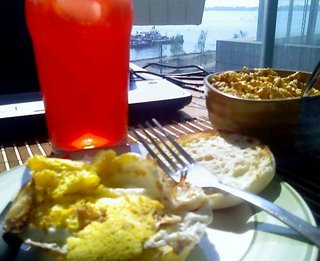 The picture of my brekkie is what I made after my shower (and devoured in seconds). Vector cereal, an English muffin with an egg topped with tzatziki sauce (yoghurt with cucumber, dill, garlic), which actually serves well as a alternate to hollandaise.. actually, who has time to make that. And a tall glass of Gatorade.. yum, Gatorade.

I have a week off so the next eight days will be bliss. It's the best type of holiday, in my hometown with nothing but errands, running, catching up with friends, sleep, movies, outside, biking, etc. 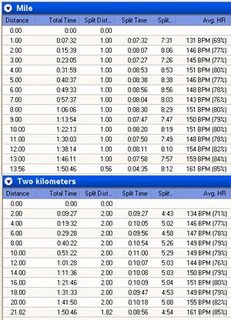 So this is a good way to close of this week. I'm feeling good about my training. I have a few small blisters on a few of my toes.. Should I be getting worrried? I have a few nails that are getting red (precursor to black?) so I've changed to a thinner running sock, which seems to do the trick for now. Next week's mileage should be pretty close to this week's.

That's a small breakfast after such a long run...no? Like the pic though :)

That was the appetizer.. had a burger and fries and beer a few hours later..