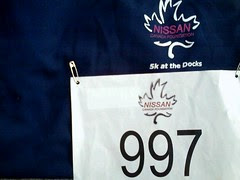 0714docksshirt
Originally uploaded by yumkerun.
As I wrote yesterday, it wasn't the greatest race i've run. I usually go all out in road races so by the end, I don't have a lot. Something I have to improve on with better pacing, better hydration. And as I said yesterday, running in the heat is not a smart idea, especially for one of us cold-lovin Canadians. 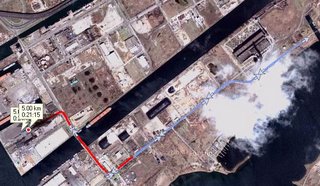 That said, it was a fun race, more than 1,100 participants, including R. and I and at least another RBFer. The race actually takes place very near the 4K to 5K point of my Cherry Beach 10K route so it's familiar territory. It's an out and back route.

We had to wait by the Skydome to take the bus to the start/finish line, and since the regional train line was suddenly closed as a result of a derailment, and the Blue Jay game was about to start, the school buses were running late. Yep, runners in school buses. They asked us to sit three per seat that usually sits two kids. At least runners are pretty fit people, so we could all jam into the space.

Running in the race were a few stars, including 75-year-old wonder Ed Whitlock who smashed the Canadian 5K record for his age group with a 18:43 finish. By the way, his training method is to run every day for three hours. I stood about 10 feet away from this amazing man at the start. Wow. Michal Kapral, The Joggler, ran 17:50 while juggling three balls, but didn't beat the Gunness record of 16:55.

I lined up near the front. The race was off and off we went. It was such a different feeling at the start compared with the half marathon or even the 10K. With such a short race, you have to fly out the front. The first kilometre was run in 3:51, the second in 4:04. I kept on checking my Garmin to make sure I was on pace (a 4:10 was what I should have been aiming for to get a sub 21 minute). By the 2K mark, I was still good, but tiring. The wind was mercifully blowing against us, giving us a cooling wind. I saw the two front runners speeding back and I gave a little cheer for Danny Kassap, a Toronto-based runner from Kenya.. Such a great runner.

On the turn around at 2.5K, I tried to maintain pace, but wasn't sure If I could. By the 4K mark, we did a turn and I was losing focus. The heat, the pace were getting to me and the fast runners around me were maintaining speed when I was fading. I ran the last K (including the stumble) in 4:55. According to my Garmin, I ran the distance in 21:10, but my chip time is actually 35 seconds slower, which meant I was walking through the finish line.. yikes.

R., meanwhile, had a nice time, running it in a chip time of 30:10. She admits she could run it faster, but is not really competitive like I am. I waved at her when I was coming back but she didn't see me. She had a fun time and bumped into an old friend at the finish.

After walking off the light headedness, I managed to find water, a banana and freezies for us.. then we walked home and had a yummy pasta dinner.. at 11 p.m.

And that's the last race for at least until late August.

Sorry to hear about the race. Gotta be careful when you redline like that. I've never liked doing 5k's for that reason.

Yeah, it was wicked hot, and stinky too! Those sprinklers at the end were soooo wonderful. 5k is a tough race - congrats on giving it your all - and you don't need me to tell you to be careful :) You had a great time, despite everything.

arcaner: Yeah, I think i'm cut out for longer races. I'm much more consistent when it comes to the half marathon, I can keep a steady pace for quite a long time. Gunning it for 5K is not my specialty.

Liv, i know, I ran under the sprinklers a few times, then i was really cool for quite a while. I had a good time. and congrats again on your PB!