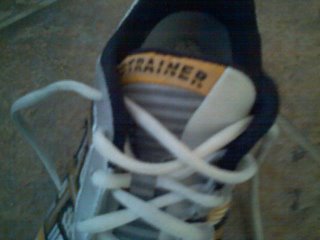 Today was speedwork day, but it was a day the forces of running were against me. It's a harrowing tale, one that started at 5:45 a.m. and ended half an hour ago, at 7 p.m.

Well, it really wasn't that exciting. By the way, meet my racing shoes, my Asics Trainers purchased in New York. It took its maiden voyage around Central Park last October. It only has about 100 km cause I've been saving it for speed sessions and breaking it in for races (I ran a 10K and 5 miler in it).

Back to this morning. I set my alarm for 5:45 so I could get in a good speedwork session. At 6:10, I set out to do two miles to the track, then do 5x800 with about 3:25-3:30 repeats, then jog back.. It'll take more than an hour, so I'd leave home earlier than usual. I was exactly one mile into the run to the track when I realized that nature was calling. And no, I couldn't go in the bushes. So back home I went, used the facilities. Decided my bed looked too comfortable so I hopped in the shower and into bed... 3K (1.9 miles) morning with promises of a better run this evening.

Wouldn't you know, i'm at work at late. Surprise! Went out to the waterfront trail to do the 5.5K trail (3.4 miles). I'd warm up for a kilometre and a bit, then do a few farklets. I do the first farklet and hit the lap key on my Garmin. I was cruisin! Going at sub-4 minute (6:30 miles) rate for 800 metres or so... Felt great. Scared the hell of out two walkers who were jolted by my breathing and strides (whoops). At the end of the session, I hit the lap button again, only to see that I hit the start/stop button. Crap. So during my first speed run, my Garmin's snoozing...

Oh well. A few lessons for the future. I managed three more farklets and tempo run for stretches before cooling down. 8.5K (5.3 miles).

Don't you hate when that happens! I occasionally do that too with my heart rate monitor when I forget to hit the lap button twice. I'm supposed to hit it once to start the HR and then a second time to actually start the lap.

I love your TGIF acronym. Wish I could say the same, but as I work on Saturdays, Fridays are usually my long run day. Boo for me! But yeah for you! Enjoy your day off.

Nice runnign Yumke, I I have done that as well, hit the wrong button on the Garmin. I have also reached in my fuel belt for a drink and bumped the start/stop button and not noticed for 2 miles. That sucks as well.

Guys, I guess we can't really rely on our gadgets all the time. I realize i'm lucky enough to have so much techo stuff at my disposal...