On the day he is sworn president on Tuesday, Barack Obama's first walk down America's main street will be lined by thousands of citizens and a little slice of Canada.

As the world's sights are set on the new U.S. President, a most unusual sort of party will be taking place on prime real estate. Canada's embassy, the first towering landmark on Pennsylvania Ave., will be a host to a tailgate party where Ottawa BeaverTails, renamed ObamaTails, will be served, topped with cinnamon and Nutella drizzled in the shape of an O. The Grey Cup will be on display and Royal Canadian Mounted Police will be on guard to offer the new leader a salute.

The embassy, with its sweeping views of Capitol Hill, will be the venue of a gathering of some 1,000 lucky invitees. "It's a great address for this event, it's the best you can get," said Tristan Landry, spokesman for the embassy. 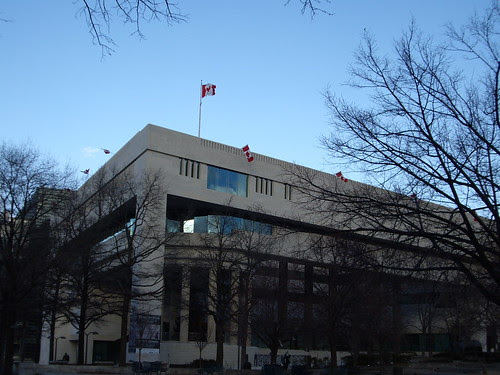 Canadians who live and work in Washington, D.C. will be out among the millions American and foreigners flooding the capital city for the inauguration.

"For Canadians, for the first time in over eight years, they can finally start to reconnect to the United States," said Emma Rigby, a Canadian who works for the Canadian American Business Council.

"He relates to everyone," says Rigby, who went to McGill University before coming to the district. "The Europeans are excited about him. I'm also a French citizen and all my friends and family sort of feel he's their president as well."

Rigby is one of the Canadians who got an invite to the embassy party, where she'll have a better view than most. During that day and week, she says that business will come to a standstill as the United States marks Obama's arrival in the capital to be sworn in on Tuesday.

Interest in U.S. politics remains high even months after the November election. Google's office said that web searchers in Quebec, Ontario and B.C. are seeking information on the inauguration in high numbers. In Toronto, partiers have the option of gathering at Wayne Gretzky's Bar to celebrate with drinks Barrack on the Rocks and watch the festivities on Tuesday.

Shelley Whelpton, a Canadian who does public interest advocacy work in D.C., says her friends and family in Canada followed the showdown between John McCain and Obama, more than even the Canadian federal election. She has campaigned for Obama, and once brought her five-year-old with her to South Carolina to knock on doors.

"It was extraordinary," she says of her campaigning experience. "Every door we knocked on, the low income people were all getting out to the polls."

And now that the election is won, the party is coming to Washington, D.C. to celebrate Obama's inauguration. On the weekend, she'll be hosting six guests, including her mother from Toronto. Even after the party has left town, Whelpton thinks D.C. will be swept up in the same type of change that came a generation ago, when hope was brokered by another young president.

"The sense is that there is going to be another wave of excitement and engagement in D.C. People want to serve in government with energy and excitement," Whelpton said.

The weekend coming up is packed with activities, some stacked with symbolism and others with star power.

On Saturday, Obama rides into town by train, the same way Abraham Lincoln once arrived into the capital. The next day, a public concert and celebration will be held on the western edges of the 3 kilometre Mall. The larger-than-life celebrity names -- Bono, Beyonce and Denzel -- will entertain. It probably won't be lost on the crowd that Obama will appear at the steps of the Lincoln Memorial, the same steps where Martin Luther King Jr. once voiced his dream.

On Monday, the nation celebrates Martin Luther King Day and if that weren't symbolic enough, Tuesday an African American will be the new president. The Bush era will end, the Obama presidency will start.

Jessica Bentley-Jacobs, a masters student from Toronto studying in Georgetown University, says she plans to soak it in -- the school has closed down for the week.

"I've never see energy like this about a political event, even in Canada. I can never see a million people coming down to Ottawa if [Stephen] Harper on a majority."

As a Canadian, Bentley-Jacobs shares the enthusiasm but acknolwedges that the Obama election has touched an emotional never.

"On election night when I was here, I felt like the outsider, all my friends were in tears.
"We're creating a generation of people who care about politics."

The weight of these few days is lost on no one in D.C. There will be at least millions, officials say, even as they warn that people will be driven away by the fear of crowds and security headaches. Residents are confused by the amount of security detail, the transportation limits and they even have trouble figuring out where to go in their own town.

Whelpton says she'll try to attend the Sunday concert and on inauguration day, find a good vantage point . "Even if I don't have a direct view, I want to be there to experience the energy and excitement."

"To be in the crowd experiencing this unique moment in American history is something."

Rigby's plan is to wander the city, attend some low key parties and try to get into the embassy party on Monday where, if she does, she'll get a good view of Obama.

"It's going to be written down in history as an incredible weekend and Washington DC's biggest weekend."