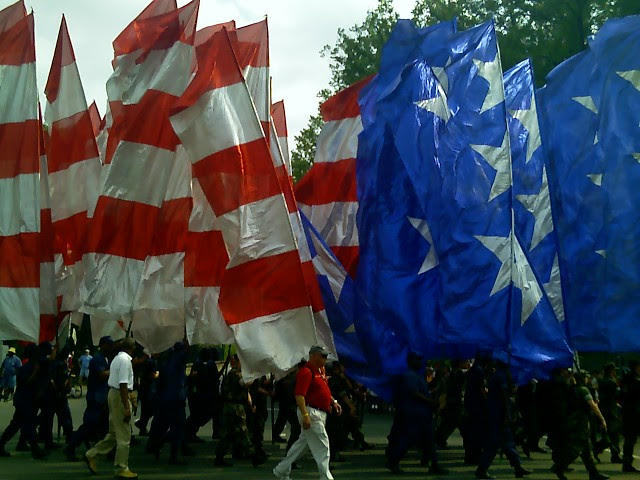 Barack Obama's inauguration is a huge deal here in DC. You hear people talking about it in the subways and restaurants and I always bring it up when I talk to someone. Something like: "Hey, what are you doing for inauguration." Everyone's excited but also pretty perplexed right now on what to do.

But like all big local events that will attract thousands, the locals can either ignore it or embrace it. Those who are fleeing have rented up their places for thousands and are leaving town before the millions arrive.

Those who are opting to stay here have several options. Try to score one of the 225,000 tickets to get close up to see Obama's swearing in (lottery win, anyone?), try to score an entry into one of 10 exclusive inaugural ball (unlikely) or try for an unofficial one. Everyone probably will try to flood the Mall or parade route on January 20th.

I read that the Beijing Olympics took 320,000 volunteers. You saw them with those white gloves and coordinated waves. You saw them fill the stands in some of the venues that didn't quite sell out. Vancouver 2010 is looking for a more manageable 25,000.

The Presidential Inaugural Committee (PIC) is filling volunteer needs for events and logistics on and around Inauguration Day, from Saturday, Jan. 17 to Wednesday, Jan. 21. Events will include community concerts, the 2009 Inaugural Parade, the National Mall on Inauguration Day, and many others. Again, registering to volunteer does not result in a ticket to the Jan. 20 inauguration ceremony itself.

PIC has additional volunteer needs in the weeks leading up to the inauguration. Please check your availability in the form below for all that apply.

Please note that due to the volume of requests, the large majority of volunteers will serve at only one function throughout Inaugural Weekend.

They're looking for people who can "lift heavy objects", "work outside" and "in inclement weather conditions"

If you have these skillsets, I'm sure you can have a better shot.
Medical/EMT

Working with People with Disabilities

Working with Press or Media
Posted by yumke at 11:51 AM