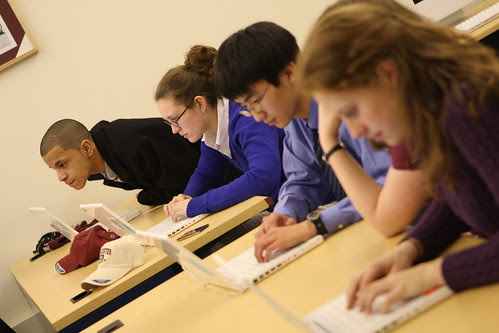 
It's all about change in Barack Obama's Washington and in the Internet age, change is coming so fast that it'll literally line the streets of D.C. when he is sworn in, speaks out and parades up Pennsylvania Ave.

On the sidelines, an engaged movement of youth -- students who he inspired with "Yes we can" -- will be there to witness history. But they won't be sidelined. Virtually speaking they'll be able to add their voices to the crowd.

Washington is the classic venue for that school class trip. On many streets, you'll witness passengers empty a bus and flood on to the street and or into the nearest Hard Rock Cafe or museum.

A history lesson is all well and good, but Obama's inauguration is providing students with the option to experience, share and report on a collection of days that are destined to be recorded for a museum or archive. Students are flocking to the capital with mobile phones, cameras and computers on hand.

David Bill has that in mind as he prepares 11 students for a reporting trip from Worcester Academy in Worcester, Mass., to D.C.

I found Bill, Director of Academic Technology at the prep school, as I was posting tweets on inauguration on Twitter so we chatted on the phone about his class trip.

"It just made sense to use technology since social media is such a big part of the election campaign," he said.

Bill got 22 applications from students -- they were required them write their thoughts and to create a one-minute YouTube video. From that pool, he and other teachers decided on four but eventually expanded the group to 11. Some but not all of the kids have worked on a student newspaper -- some have a passion for politics.

On inauguration day, the teachers will be sending the students in groups out to report, record and interview, feeding their information into Flickr (a photo site), Twitter (live updates), post blogs and shoot video. 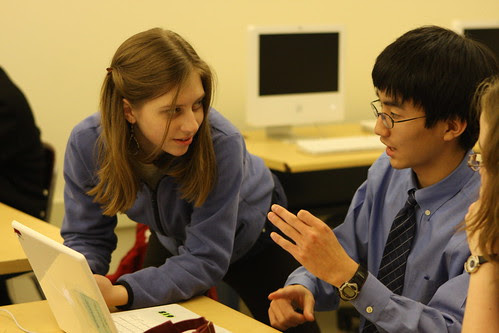 For those who don't understand the 2.0 language. Tweets are 140 character updates on what you're doing, sort of like Facebook status updates. Flickr is a site that allows you to upload images.
"They'll go out and interview folks on their themes and also be using their iPods to record audio interview and we'll broadcast YouTube and blogs," Bill says

They'll be asking and considering questions like, why are you here for inauguration, what are the major issues Obama has to face. Bill has also asked the students to come up with their own ideas.

"I want to make it a student centered project," he said.

"I'm hoping that students are able to get an opportunity to experience this event and be able to participate in this -- not only as observers but as reporters using these mediums."

It's Bill's first time trying to turn a class trip into a reporting assignment, and aside from logistics -- like where the kids will go if they get lost, or where and when to meet up to file pictures, audio and blog posts -- he has to make sure they are adept with the technology.
"I mean honestly for them it's interesting on a lot of levels, a lot of these kids haven't used Twitter before -- and they are very tech savvy.

Not so for Patrick Horan, who's deep into Twitter and a big supporter of Barack Obama. He agrees that the Internet had altered the political campaigning landscape

"If you are not connected with social media, chances are you wont win the election," he wrote back in a tweet exchange.

"I hope to get a life changing experience by this, and to cover something so historic that I will remember it for the rest of my life."

Bill says the "social media explosion is hitting our schools."

Since we talked, his group is getting a lot of attention. Just as I'm writing this post, they tell me they're being interviewed by a Boston TV station.

"One of the things that the kids are getting used to is that their voice is being spread to the entire world as more and more people are following this," Bill said.

Everywhere you look, there are students who will be heading to inauguration with more than partying on their mind. A group of students from DePaul University in Chicago will be documenting their trip. Also, many individuals have committed to 'filing' from the scene like Briana Saunders.

Danielle Pietro, another student from the academy, said she aspires to teach, and a few days spent reporting at the inauguration would lend good street cred, a litte more than 'I was there' tale.

"I'm most looking forward to interviewing individuals at the Mall and learning about their personal stories and what this election means to them," she wrote to me.

"On Tuesday, no matter what, everyone will be coming together for a common cause, and what brought each individual there will be interesting."

"I absolutely think Obama has changes the way youth see politics. He has brought the politics to us through social media, something youth follow more closely than anyone. This election really brought out the young voters in force, as they were able to track what was going on through sites they use every day.

We at the Post have been in contact with these groups and we plan to help broadcast their voice on inauguration day. Watch this space for live tweets, blogs, pictures as we open up the coverage in a way traditional media can't. Watch for a guest post or two from the group here on Posted.

Says Bill: "Obvious there will be lots of media there. My aspiration for this project is to get the kids to add their voice to that process."
Posted by yumke at 10:30 AM