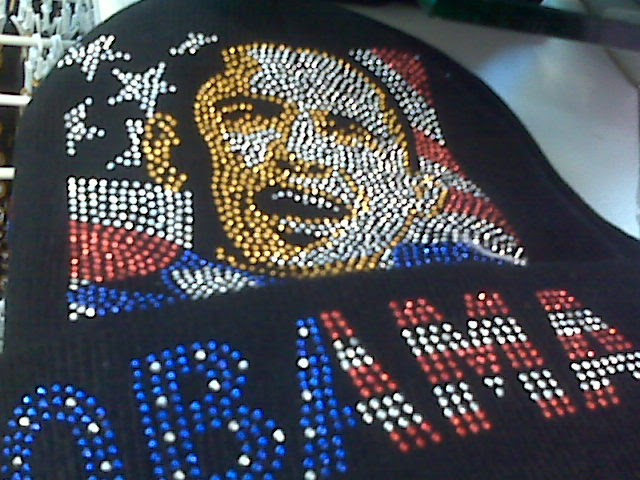 I'm already sick of seeing Barack Obama's mug on everything from pens, toques, bumper stickers, pens, T-shirts and pint glasses. But that's only because I spent a few hours recently touring the souvenir stores in Washington, D.C. I also may have bought a few for myself and friends.

Before I take you through a quick tour of D.C.'s souvenir favourites (grab a copy of this comic book while you can), there's a tonne of stuff going on sale online:

Over at Amazon.com, they've set up an Inauguration Day 2009 shop where you can find Obama 'hope' T-shirts, LED rope light and mugs. See more here

And of course, you can find plenty of online stories if you're looking for Obama souvenirs. A few examples.

As a service to the hundreds of thousands -- millions, even -- who will be descending on Washington D.C. over the next week, here's a local look at where you can find Barack Obama gear in the U.S. capital all within walking distance of the Mall and Pennsylvania Ave. Note that the D.C. government has also set aside sites for vendors during inauguration. See Washington Post on that here.

Official store (625-627 E Street NW):
Obama's inaugural organization has set up an online store where you can get the usual items. They've also set up a brick and mortar official shop on E St. Expect nice looking stuff but also on the expensive. T-shirt starts at around $20.

Cool factor: High. This is the official store so you'd expect to pay a lot more than elsewhere, but where else are you gonna find Obama-approved gear? 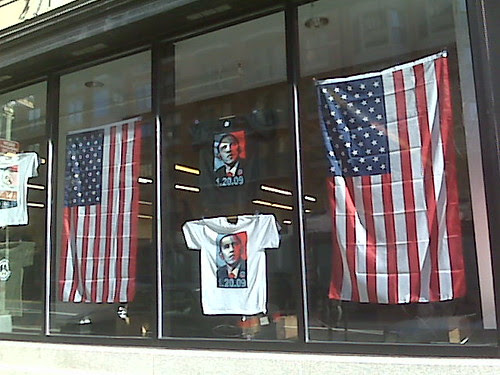 Temporary 'Inaugural superstore' (421 7th Street, NW): I visited this shop last week and it was pretty quiet. Expect it to be busy in the days leading up to inauguration.


Cool factor: Of all the stores, it has a lot of funky T-shirts -- if souvenir shops were museums, this would be the Museum Of Modern Art. Which is not to say it's the best but the younger set. They have T-shirts in youth and adult sizes, hoodies and sweatshirts.

Price: This store is on the higher side. One obvious money grab is colour printouts of newspaper fronts from Nov. 5 for $6.99! each. T-shirts around $15 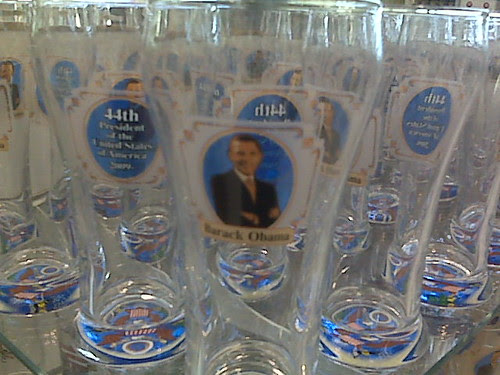 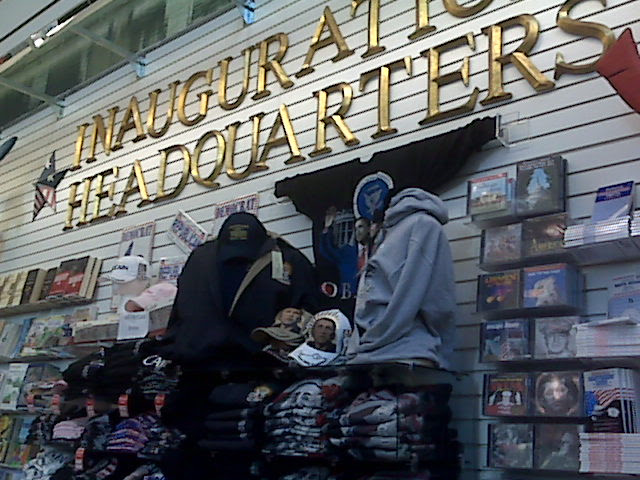 'Souvenir row' (10th Street NW between E and F Streets, NW): My girlfriend lives around the corner from the 10th and E Street NW to 10th and F Street NW, which is home to three shops and some outside vendors that sell presidential and D.C. souvenirs all year long. The one at the corner of 10 and E caters to the bus and tour crowd. It's bright and has lots of options: stickers, hats, shirts, mugs, pens, glasses.

Cool factor: If you're looking for kitch, this is plenty of items in that venue. Plus, where else can you find FBI merchandise as the FBI building is across the street. You can still find McCain and Palin memorabilia and if you're lucky, you'll find John Edwards and Rudy Giuliani mugs. 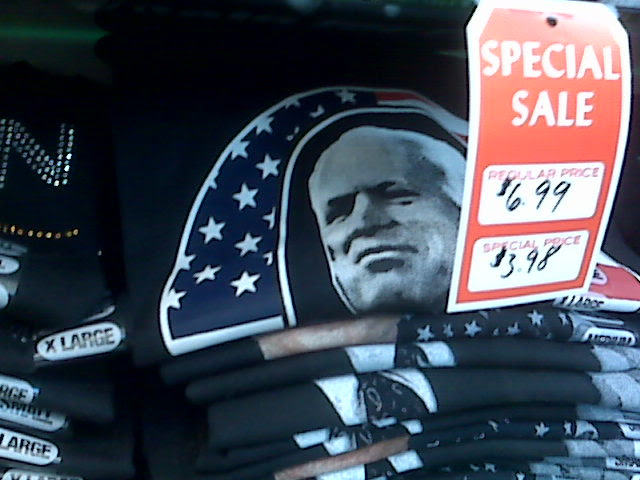 The other two on 10th Street NW are among the cheapest you'll find and offer no frills, just stacks of clothing and goodies. The vendors are open all year round so they're used to the big crowds but expect even them to be overwhelmed.


Cool factor: Beware because as the prices drop, the kitch factor rises exponentially. T-shirts from $5.

Price: They have stacks and stacks of T-shirts ranging from $5 up to $8. Sweaters and hoodies are more expensive but still doable. 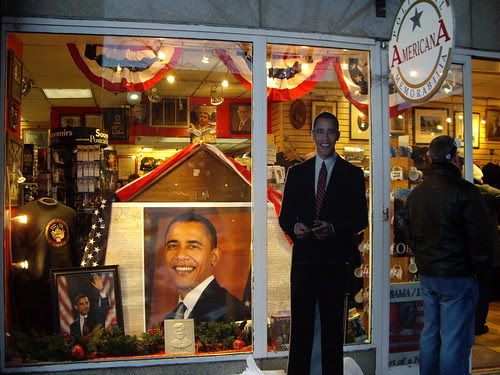 Political Americana (1331 Pennsylvania Ave NW): This store is about a block away from the White House and last we saw, it had been transformed into Obama central, the only one with a lifesized (we think) cutout of the President-Elect. They is a looping video being played and the tiny space has the usual wear plus extras like Barack Obama action figures. T-shirts from around $13
Online store here

Cool factor: You'll don't find much that you can find on souvenir row but you will find a lot of Presidential items that aren't elsewhere. Plus, last I saw, they had cool Obama action figures (everyone is selling bobbleheads).


Price: Because it's so close to the White House, prices are a little higher than elsewhere but cheaper than the official store.


The souvenir trucks (15th Street, south of E St, NW): These are fun to look at but I've never bought an item. Alongside the White House are rows of mobile vending stations that sell snacks and T-shirts and sweaters. Last time I checked there wasn't a tonne of Obama wear but expect that to change. T-shirts: Dirt cheap. 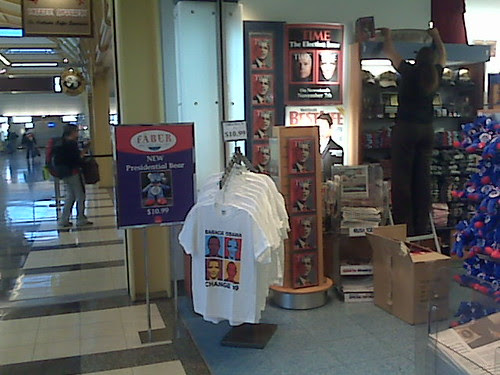 At the airport: You'll find at DCA (Reagan National) half a dozen stores (see one above) scattered throughout so if you want to pick some up as you're arriving and leaving, it's a nice last resort.

And, if you're wondering where they, here's a Google Map for you, with all the points. 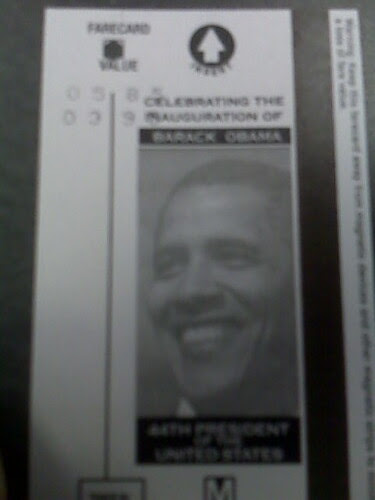 Of course, you can just buy a fare card at the Metro station. They've
started to print images of Barack Obama on them. I think they go for as
cheap as $2 and you can use them to get around.