Obama's inauguration: Now he's in DC, the question is, will we get a glimpse? 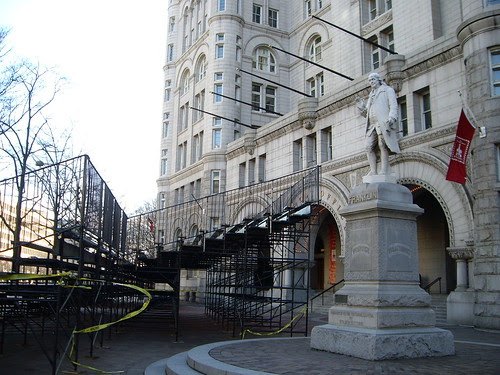 Barack Obama flew into town to his temporary home Sunday before he settles in the White House in a mere two weeks from now. The Washington Post's Style section this morning described how supporters lined up for hours, got a look at Mrs. Obama's arm and got a look at the girls. Hours later, he's in a separate procession and whisked into his home with just enough time for a camera lens to snap a picture or two.

The inauguration events will be massive -- a train trip from Baltimore to DC on Jan 17th, a public event at the Lincoln Memorial on the 18th, events in general on Martin Luther King Jr. day on the Monday and finally on inauguration day, he'll be sworn in at the Capitol, parading up Pennsylvania and then attending 10 inaugural balls. On Monday, Obama announced he'd host the first 'Neighbourhood Inaugural Ball at the Convention Center.

So the question for those unlikely to score tickets to main events will be: we we see the man? I'll be in DC during the inauguration and I've know I probably won't see Barack Obama all week even with all the public events. Here are best bets for sightings:

1. Get a ticket: There are 225,000 tickets to the swearing in near the Capitol. There are 10 official balls that are sold out. there are thousands of bleacher seats. All of these are out of grasp of most at this point.

If you're in the DC area, maybe this is your best shot:
Says Obama:

2. Stake out ground: At the Lincoln Memorial on Sunday when Obama has a public event. And on inauguration day, if you get there early enough, you may be able to get a gimpse of Obama on Pennsylvania Ave.. At the parade route, on Tuesday, you're allowed to line up at 7 a.m.

3. Settle down and watch it on TV: It's pretty obvious that the best views of Obama will be on television. At least one bar on U street is selling tickets for at least $75 so you can watch the inaugural events with a crowd from 11 a.m. to 3 p.m.

4. Be part of the crowd. There'll be lots of random parties -- both on streets, in bars and restaurants that can open until 4 a.m. Obama will likely not be there.
but at least you'll be able to take in the sights with millions of others.
---

Photo: Status of Benjamin Franklin on Pennsylvania Ave., where there are bleachers that will provide a great view of the Obama's on Inauguration Day. Kenny Yum

Kenny, I love your inauguration postings ... am planning to take my family to DC during Obama's term. I also work with TravelMuse, and coincidentally, we worked with a former White House staffer to put together insider tips on the inauguration. Since you are follow the events of Jan 20 ... i thought you'd enjoy this. Link to news is:
http://www.travelmuse.com/about/press-releases/travelmuse-pr-01-06-2009.htm

btw. I am a mainland girl married to a local boy from Honolulu. We are on Oahu now (and we were here when the future prez was in Kailua). Quite the buzz on the islands.