Obama's inauguration: For Penn Quarter residents, change may be a minor inconvenience 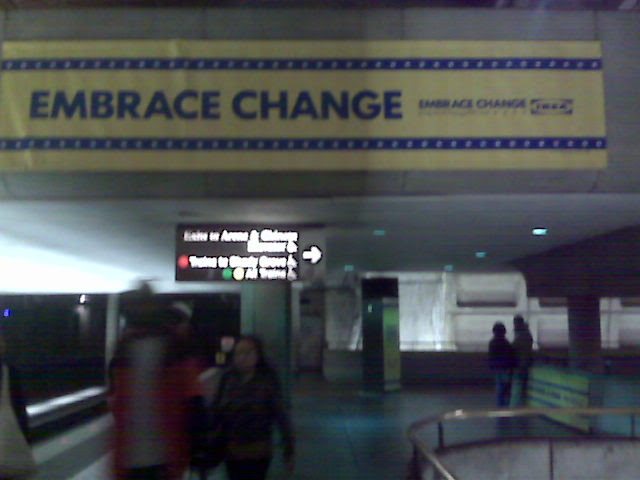 Took this picture of an Ikea ad at Gallery Place Metro station, which is in the heart of Washington DC's Penn Quarter, a block away from the parade route on Inauguration Day after Barack Obama is sworn in.

The Penn Quarter area of DC is mixed with condos and government buildings and tourist attractions. On one street, you'll find thinktank headquarters, a spy museum, the Ford Theater, the FBI building and two McDonald's within a 3 minute walk.

It's just north of Pennsylvania Ave., where a massive rejuvenation sparked by the building of the Verizon Center (home to professional hockey, basketball and college basketball) also fuelled a mini condo boom.

So now for this inauguration, thousands of residents are trying to go about their daily lives with little fuss, but for some, they may just as well take a day off to stay at home and watch it all on TV.

One of the condos issued an inauguration to residents yesterday, saying that, among other things.
-nearby subway stations would be closed for two days
-no access to rooftops during Inauguration (DC is known for its building heights)
-no access to their surrounding city streets between 3 a.m. and 7 a.m. on inauguration day because of a security sweep
-They'll need to show proof of residency to be able to navigate in this area.
-And something about taking their pets out during some hours. Yikes

A local DC blog Penn Quarter Living is polling residents on what they'll do on inauguration day and results are pretty interesting.

Where will you be on January 20th, the day of the Presidential Inauguration?