Obama's inauguration: Why we are here 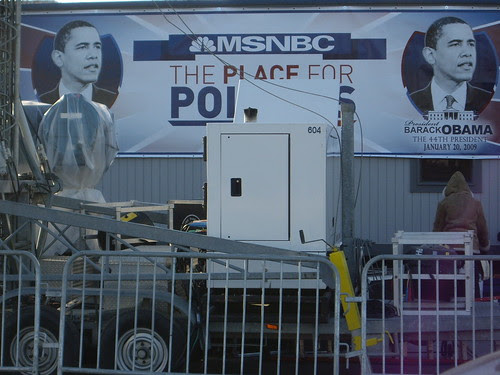 It's really a simple phrase, but in some cases, it resonates for a lifetime.

Growing up, my dad rarely said the words "I was there." He once told me about the riots in Hong Kong in the late 60s, "I were there" moments that led him to leave his home for Canada. He told me of another time years later when he took me up on his shoulders at Toronto City Hall to protest against discrimination, a landmark moment when the Chinese Canadian community found its political voice. "You were there," he told me proudly years later when I was old enough to understand.

The "I was there," I'm coming to believe, is an invocation of a significant moment, a phase that trumps "where were you when?" (We save these for the truely big ones, 9/11, Kennedy shot, Man on the Moon.)

Yesterday, I repeated a routine I've done a few dozen times, packing my bags for a flight from Toronto to D.C. Over the past two years, I've hopped back and forth to visit my girlfriend who works here as a journalist. We've spent Christmas, July 4th and many a long weekend during the height of the summer tourist season or the winters when it feels a lot quieter -- that is, until now.

When I emerged from the Metro in D.C.'s Penn Quarter late last night, I stood and paused on the north side of Pennsylvania Avenue. On other days, I'd usually just ignore the view and walk up a few blocks to the condo. Today, I paused and looked down towards the Capitol. It's quiet here now, but for not much longer.

During my last visit, I could sense a city getting on the verge of something. The souvenir shops were steady, but quiet, and brimming with merchandise. The streets were being fortified with bleachers and a fresh coat of paint lined the parade route. The Capitol Hill stands were under construction even as the Christmas tree was being taken down on Congress's front lawn.

He's here, in street corners, adorned on hats and T-shirts on residents. His campaign signs are still displayed in the front windows of stately row houses where rent starts at $2000. He owns the print medium, on store fronts, newspaper stands and bookstore shelves.

I heard plenty of the talk. The passengers on subways are speaking about plans on how The Day should be a day off (it is now), on how what a travelling nightmare it'll be, on how they're not even sure where they'll go, but all the while, most want to be here.

You'd be mistaken if this weekend was all about him. It's about a city and a world preparing to celebrate his arrival. This weekend is about the hundreds of thousands who will come to the world's political heart, arriving in tour buses, stopping at the stately railroad station and at the nearby airports. They're ready to cram into the area's overbooked hotels, the floors of generous homeowners and the abandoned flats of some who want to escape the hype.

The number that will crowd into the city's heart from Sunday to Tuesday may will surpass the millions -- officials adjust their estimates, maybe in the hopes that it'll dissuade a massive gathering. Of those millions, how many will see him at public events or private galas? Everyone I talk to hope they will see him, hope they will be part of it but even if they don't get to see the man, they seem to gratified that they'll have that chance to come in contact with history. They can say "I was there."

Photo: MSNBC setting up in the Mall for inauguration.
Posted by yumke at 10:27 AM