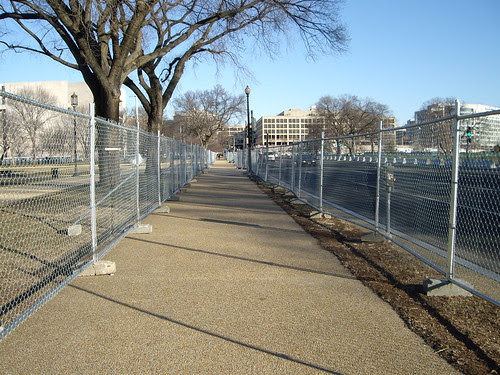 Washington, D.C. -- The headache, it seems, is what we're going to do this weekend with the mass of crowds here for Barack Obama's inauguration.

We went out to U Street last night and it wasn't quite as busy as usual. Gathered around a table at a pizza joint at U and 14, the group of six of us talked about our plans for the weekend.

On inauguration day, one couple plans to start at 5 a.m. and try to make it out to the Mall. "I want to see him sworn in," she told me.

Another women is hosting a family member who's a massive Obama supporter (I seem to meet a lot of them) and is glad he'll explain all the procedures and people they'll encounter on Tuesday.

Yet another friend has tickets for an event at one of the buildings on Pennsylvania, where they will have warmth, a party and a perfect view of the parade.

I'm going to just make it to the parade route and see how it goes from there. I'll start as early as the security lifts.

There's a big concert on Sunday, where celebrities and musicians are giving a concert at the Lincoln Memorial -- you'll see it on TV that night. Some who live here will stay well away. I'm going to try to go. Others fear the crowd.

We left the restaurant onto U Street. Yes, it was a lot quieter than usual. U Street is home to D.C.'s music scene, jazz clubs and Ben's Chili Bowl. It's also the cultural heart of the district's African American community. I'm expecting it will be hopping.

We went down into the Metro station where there are murals of African Americans. Two women took their camera and snapped a picture. It's going to be busier in the next few days. We're going back to U Street tonight. We'll see.