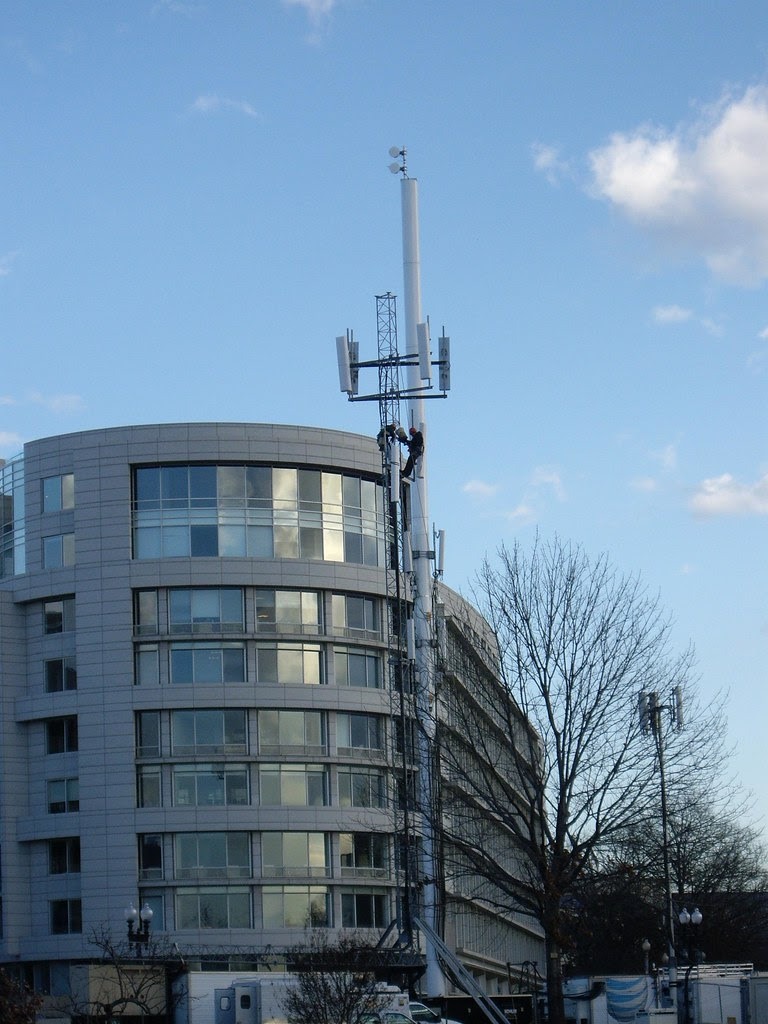 Forget mass crowds on Barack Obama's inauguration day on January 20. It's going to be a mass crowd with cell phones and smart phones. They'll be snapping pictures, micro-blogging, mobile reporting and tweeting during the days leading up the big day. On inauguration day, it's going to flood the web and blogosphere. This will be the internet inauguration, if you know where to look.

The picture above is one I snapped a few days ago of workers installing extra temporary cell towers at the base of Pennsylvania Ave., near the Capitol Hill. Officials were earlier worried that cell phone coverage would go down during Inauguration Day, when thousands, or maybe much more, will be using their mobile devices to share information.

We've seen the big events by now how the mobile and plugged generation is now uploading images.

There's a scene in the movie Cloverfield in which (without giving away plotlines) a crowd of onlookers snap pictures of a massive object that nearly killed them. Its director, Matt Reeves, is quoted as saying here:


"Cloverfield" very much speaks to the fear and anxieties of our time, how we live our lives. Constantly documenting things and putting them up on YouTube, sending people videos through e-mail - we felt it was very applicable to the way people feel now."

On inauguration day, I'm expecting no less, including the obligatory calls we'll make home that goes like:

Officials in Washington are sending likely to be ignored warnings for people to send out text messages, to try to stay away from voice calls (which take up too much data) and to save uploading pictures for later.

But one of the interesting things about inauguration is how a crowd can help 'report' what they're doing. Twitter should be the key. It's the service that allows people to microblog and answer one simple question, 'What are you doing', in 140 characters, enough characters to send out one text message. Alone, like Facebook status updates, it may seem mundane, or even narcissistic, but together, it will show the power of tapping into a wide reporting pool. Think Mumbai attacks or the more recent Gaza conflict (by searching #mumbai and #gaza on Twitter) and you'll find the power of a wider range of opinion, thought and, in some brilliant cases, some reporting.

At the Post, we use Twitter to provide readers with a quasi wire service. And a search of a key word (called hashtags) can lead you to very interesting results.

Such as this search for "#inauguration"

andreajares: Choose what Michelle Obama will wear to the #inauguration http://tinyurl.com/7qppq3 (expand)

Obama's inaugural committee also has a Twitter account, Obamainaugral, which it's using to dessiminate information to followers. Can you imagine how useful it would be on Inauguration day to direct crowds? Remember it was the Obama camp that used text messaging to announce his pick of Joe Biden.

Interestingly enough, the LA Times has a piece Wednesday about Obama's use of text messages during the campaign. They texted one million people the Biden news. Says Scott Goodstein, who coordinated Obama's 'mobile campaign'


I think communication goes in waves. It just depends on where the eyeballs are. For awhile it was TV. TV had the eyeballs. That changed. You can no longer communicate to people by just airing commercials on television.

Even if you want to reach your base of voters, they’re not all watching the same channel. As TV and radio and the newspaper industry are dying, you’re noticing that people are now getting information from hundreds if not thousands of websites.

New media and the Internet and text-messaging all have millions of people communicating in unique ways, and I don’t think it’s going to be going anywhere for a very long time.

So what does it mean for the Inauguration? NPR is asking citizens to use the keywords #inaug09 to cover inaugration day and #dctrip09 to cover the trip leading up to inauguration day. They will be using it to get an interesting read -- call it instant streeters, those qoutes that news media seek when they're looking to personalize a big story. They've also asked people to upload photos to photo sharing site Flickr.

I'm going to be headed out on that week with my camera, my cellphone and BlackBerry and I'm going to be doing much the same: documenting what I'm doing during a historic week and sharing it with others. Together with the thousands of others, we'll provide an interesting chronology you won't get with official coverage. That is, if I can get a cell signal.
Posted by yumke at 10:30 AM

Great article! Incidentally, I recorded an Obama Inauguration track with a rapper in Atlanta called Mr. Buckem. Check it out and let me know your feedback: